Trevor Bayliss has warned Tuesday’s poor performance in Colombo could cost players their chance of making the World Cup squad. 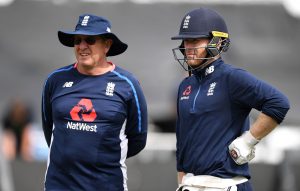 Trevor Bayliss and Eoin Morgan at training ahead of the third ODI, England Lions v India A, Worcester, July 16, 2018.

England suffered the worst loss – in terms of runs – in their ODI history and, while Bayliss reasoned the experience could provide a useful wake-up call, he also stressed that time was running out for several players to press their case for selection.

England now have only one ODI series left – against West Indies in the Caribbean in February and March – before they have to select their 15-man World Cup squad.

“It’s one thing giving guys an opportunity, but those guys have to take hold of that opportunity,” Bayliss said. “Those opportunities could determine who makes a World Cup squad and who doesn’t. That’s the way it is. It’s a tough school, international cricket.

“There are not too many more opportunities before the World Cup squad is picked, so some of the guys will have to turn it around pretty quick. We’re looking for some of those guys to take hold of that opportunity. If they do, they might find themselves in a World Cup squad. And if they don’t, well, they might miss out. There will be some disappointed guys in the changing room.

“Our batting and spin-bowling line-up is pretty well set ahead of the World Cup, so it comes down to pace bowling. The West Indies series could mean a lot in that respect.”

Bayliss was particularly disappointed with England’s attitude in the field. Not only did England put down three chances – two of them relatively simple – but he felt the general display lacked intensity.

“We have some good fielders in the team, and some guys who aren’t quite as naturally gifted athletically in the field. At the very least if you have the right attitude, you’re going forward and you want the ball to come to you, that can make up for a lot. We were a long way short of that.”

But Bayliss did feel that such a drubbing might remind his side that there is no room for complacency in international cricket and suggested that winning the series in conditions in which England players often struggle suggested his side were learning to adapt their games to the circumstances as required.

“Winning the series is what we set out to do, so I’m very happy in being able to achieve that,” he said. “But this was a bit of a reminder that you can’t take your foot off the gas and it’s not quite as easy as some guys think.

“If you are not 100 percent on it, this game can bite you in the backside.

“The good thing is the way we adapted to different conditions. The conditions will be different in the World Cup but it’s a good sign going forward. We’ve shown we can play a little bit differently.”

June 2, 2021 byRevatha No Comments
Tennis domination of the Big Three goes on...