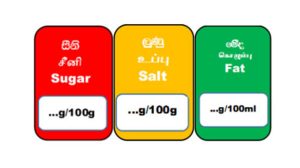 The colour coding requirement for solid and semisolid foods that came into effect recently will cost biscuit manufacturers of the country well over Rs. 1 billion, The Sunday Morning Business learns.

On 1 January, the Ministry of Health, Nutrition, and Indigenous Medicine implemented a colour coding system to indicate sugar, salt, and fat levels in solid and semisolid foods. The new regulation came with a grace period of six months that ends on 31 June.

Speaking to The Sunday Morning Business, Lanka Confectionery Manufacturers Association (LCMA) Chairman S.M.D. Suriyakumara noted that this new regulation would cost the entire confectionery industry of the country a minimum of Rs. 1.5 billion.

“Rs. 1.5 billion is the minimum cost and it could go beyond this amount. Companies have to get their additional cylinders for printing purposes from Singapore and India. At the moment, there is only one Sri Lankan company that is capable of providing these cylinders,” Suriyakumara noted.

He further added that despite additional costs in billions of rupees, the industry welcomes the move by the Government enabling consumers to be well aware of their consumption of sugar, salt, and fat.

However, he noted that the confectionery industry of Sri Lanka uses only 5% of the total sugar imports, while the remainder is either being consumed directly or through liquid consumables.


The Sunday Morning Business spoke to some of the leading food producers and confectionery companies in Sri Lanka who would be affected by this regulation.

Speaking to us, a senior official from a leading confectionery company that exports to over 60 countries noted that the company will incur an additional cost of over Rs. 1 billion due to this new requirement.

“We had to get their cylinders from Singapore. The foil also had to be reprinted. Even if this is a onetime cost, it is a massive one, even for a big company like ours,” the official noted.

According to the official, 95% of their products have complied with the new requirement while the rest will comply within the next couple of weeks.

Meanwhile, a senior official from another leading confectionery company noted their loss due to the new requirement would be above Rs. 20 million as they also have to get their cylinders altered from Singapore.

The official noted that most of their products are compliant with the new standard and they expect to fully comply before the end of the grace period.

Another senior official from a leading dessert producing company noted that they would incur a cost of over Rs. 1 million as they have to purchase new gravure printing machines to print salt, sugar, and fat indicators. Gravure printing, or rotogravure printing, is a type of intaglio printing process which involves engraving the image onto an image carrier.

According to the senior official, the company would fully comply with the requirement before April this year.


The Sunday Morning Business spoke to the subject Ministry with regard to the new regulation, and we were told that this was a regulation especially requested by the industry for implementation.

However, commenting on this, Suriyakumara and other senior officials of leading confectionery companies noted that the request by the industry was prompted by the Government.

The Government wanted to implement the regulation one by one for sugar, salt, and fat, but the industry wanted all three implemented in one go due to high costs involved in buying and fixing cylinders three times, a senior official from a confectionery company noted.

In addition to this, according to the industry, there were also disparities amongst the industry and the Health Ministry, as initially the Ministry came up with a circular sticker, similar to the current one on beverages indicating sugar content, for solid and semisolid food items.

However, the industry did not want to proceed with those stickers as most of their products are exported to international countries, and printing different stickers for each and every market would be troublesome. Therefore, they requested for an internationally accepted traffic light sticker system to be brought in, similar to the UK standards, to which the Health Ministry later agreed.
Currently, the proposed stickers are rectangular with curved corners and follow a traffic light system.

The content colour coding system for solid food was initially announced in 2 April last year and was said to be made mandatory from 1 July the same year. However, it was not made mandatory as announced due to concerns pertaining to insufficient time for implementation raised by the industry. The industry requested for a grace period of a minimum of one year, which was granted subsequently until 31 June 2020.

May 26, 2021 byNews Admin No Comments
The Hambantota International Port Group (HIPG) will partner with Intertek Lanka (Pvt.) Ltd. to establish a state-of-the-art petroleum testing laboratory which will be unique to Sri Lanka. Through this