Colours of choice: Legal and political challenges faced by the LGBTIQ+ community

The Yeheliya Foundation held the second edition of their “Colours of Choice” webinar series on 10 January. Colours of Choice focuses on the vast challenges faced by the LGBTIQ+ community, and how society can support 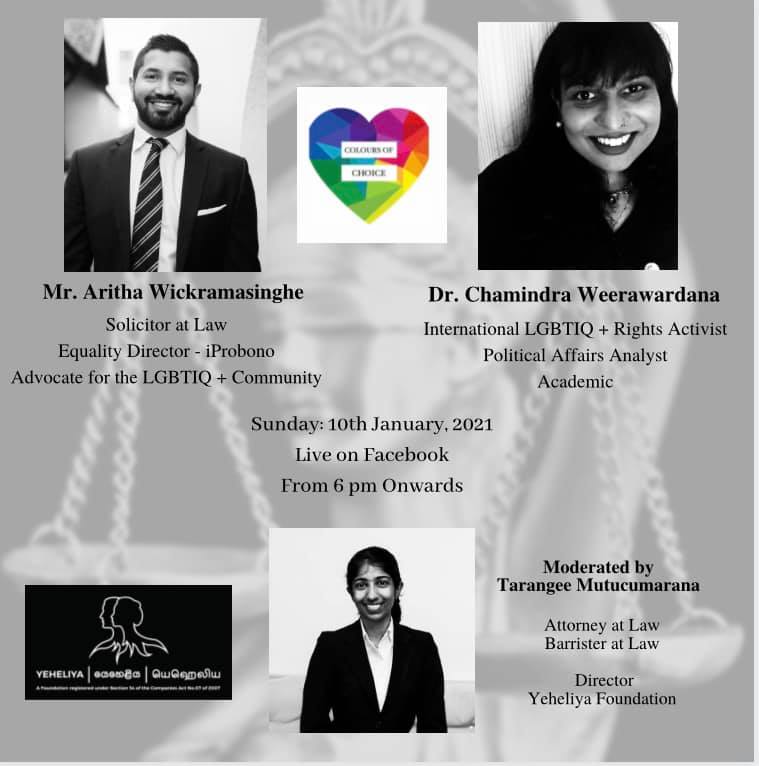 inclusivity, the advancement of LGBTIQ+ rights, and their acceptance.

Furthermore, Wickramasinghe shared that the law has even been used to prosecute heterosexuals, citing Singapore as an example, where men started being prosecuted for receiving oral sex, to the point that a judgement was made that oral sex was permissible, provided it lead to reproductive (vaginal) sex.

Wickramsasinhge expressed that these laws shouldn’t exist in any society, because it is a gross interference for consensual sexual activity to be policed. Wickramasinghe also addressed why these laws haven’t changed in Sri Lanka, and highlighted that other colonies have since challenged the constitutionality of these laws in the years following their independence. Wickramasinghe further commented that the Sri Lankan Constitution doesn’t allow for judicial review, which means that laws can only be changed by Parliament, where many members are elected because of racist, sexist, homophobic, and other discriminatory agendas, and are unlikely to push for changes to be made to the legislature.

Wickramasinghe noted that despite these challenges, there is still positive progress being made: Transgender identities are legally and medically accepted, and the Attorney General has, on multiple occasions from 2014 to 2019, stated that laws set forth in the Penal Code cannot be used in a discriminatory manner towards the LGBTIQ+ community. Despite this, however, there have been active prosecutions against the LGBTIQ+ community led by the Police since 2018.

Speaking further on transgender acceptance, Dr. Weerawardhana explained that since 2015 or 2016, a circular issued by the Ministry of Health has been in place allowing transgender persons to officially change their gender from the one they were born with to the one they identify with on national documents. Dr. Weerawardhana stressed that while this right does exist, it is on very thin ice because this merely a circular, and thus can be overturned at any time. Furthermore, Dr. Weerwardhana explained that the circular pathologises transgender people, requiring that they be diagnosed with gender dysphoria to legally change genders – a process that can sometimes be complicated by discrimination and lack of awareness within the healthcare system.

The Colours of Choice series can be viewed in its entirety on the Yeheliya Foundation Facebook page.

One for the road: Colombo’s bars and nightclubs in the wake of Covid-19’s resurgence

October 25, 2020 byCharindra No Comments
Following the first wave of Covid-19 and the subsequent lockdown, Sri Lankans were more or less returning to their normal lives when the second wave hit.

November 5, 2021 byNews Admin No Comments
If you are a travel enthusiast keeping an eye out for new and innovative travel content, then it is highly likely that you’ve come across Nadun Tennakoon’s “into the jungle”. You may recognise it as t