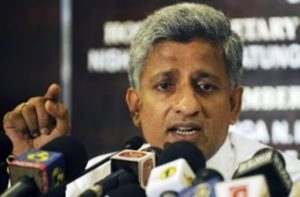 The Colombo Colts Cricket Club, the thorn in the flesh of the Shammi Silva-led former Sri Lanka Cricket (SLC), has come to the fore once again to inquire about an array of alleged malpractices of the former cricket board.

In a letter, dated 5 May and undersigned by its President and former local cricket administration stalwart Nishantha Ranatunga, Colts have requested the current Administrative Committee under Prof. Arjuna de Silva –which is overlooking national cricket administration until SLC’s next Annual General Meeting fixed for 20 May– an inquiry into what they say are “abuses, misconducts, and malpractices of the (SLC) previous committee.”

They have also urged the Prof. de Silva committee to “report the same (alleged abuses etc) to the Minister of Youth and Sports Namal Rajapaksa as well as the members and the stakeholders of SLC. 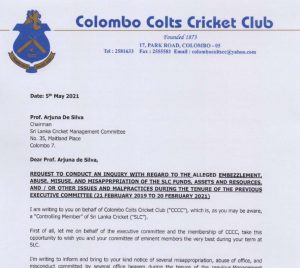 The 5 May Colombo Colts CC letter to the Administration Committee of Sri Lanka’s cricket under Prof. Arjuna de Silva 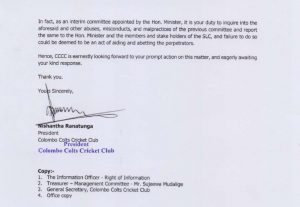 With barely 12 days to go for the election, Ranatunga and co have also emphasised in the same letter, in a somewhat ominous tone, that “failure to do so could be deemed to be an act of aiding and abetting the perpetrators.”

There are four main issues that have been raised in the said letter:

June 10, 2021 byRevatha No Comments
Some major sports happenings on this day