Commemorating the victims of religious violence

In order to commemorate International Day Commemorating the Victims of Acts of Violence Based on Religion or Belief held on 22 August, Minormatter is hosting a webinar that will raise awareness and increase public discussion on the freedom of religion or belief (FoRB), a fundamental human right guaranteed in international law. The webinar will be held on 22 August to address intolerance, discrimination, and violence against persons based on religion or belief. 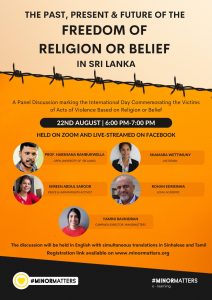 The panellists will seek to explore the past, present, and future of the freedom of religion or belief in Sri Lanka. Having weathered a fair share of religiously motivated violence, riots, and pogroms, their aim is to remember the lives lost and scarred, revisit past events and moments that led to such tragic and catastrophic events, and assess the country’s handling of current challenges to FoRB.

The panellists include Prof. Harshana Rambukwella from the Open University of Sri Lanka (OUSL), who will be discussing underlying issues and fault lines that drive religious intolerance, discrimination, and violence in Sri Lanka; historian Shamara Wettimuny, who will highlight key moments and events in Sri Lanka’s historical narrative that had a bearing on FoRB; MinorMatters Campaign Director Yamini Ravindran, who will give an overview of the current status of FoRB in Sri Lanka – specifically, the overall stats, types of violations, state of victims, and emerging trends concerning FoRB; peace and human rights activist Shreen Abdul Saroor, who will be focusing on the anti-Muslim sentiments in our country; and legal academic Rohan Edrisinha, who be discussing lessons learnt from history, recommend steps to mitigate religious violence, and to promote religious freedom, taking into account constitutional provisions and relevant legal frameworks.

Brunch spoke to Ravindran and Saroor to learn more about what to expect at the webinar.

Ravindran explained that the discussion will be geared towards critically reflecting on social histories and contemporary issues concerning FoRB and addressing what needs to be done in the present to build a more inclusive Sri Lanka in the future, where the freedom of religion or belief is enjoyed by all. Accordingly, she stated that the panel discussion would include conversations on underlying drivers of FoRB issues, key moments, and events in history that had a bearing on relations between religious communities and lessons from history that are applicable to the present context concerning FoRB in Sri Lanka.

Saroor commented that the discussion will also focus on highlighting contemporary concerns and challenges to FoRB and identifying reforms and remedies needed to prevent tensions, address issues, and build a more inclusive Sri Lanka going forward.

Going back to how the situation with Covid-19 in the country induced hate on Muslims, she highlighted that compulsory cremations was one such factor. “To date, the Muslim community has not got over it. The religious burial that has been given right now is creating a lot of strain on the community,” she said, adding that even access to the community to get vaccines is becoming problematic because the community is not safe in the system due to the forced cremations.

Giving us an insight into what she will be talking about, Ravindran commented: “We will be looking at the past and revisit events and moments that led to tragic or catastrophic events and assess our current handling of such events, and talk about how we can go forward in the future.”

With the webinar, they hope to build a more inclusive Sri Lanka, where in the future, the freedom of religion or belief is enjoyed by all.

Ravindran will focus on the anti-muslim riots held in Digana back in 2018 and how youth were the main perpetrators. “I will also touch on how social media platforms were used in an unethical manner. The way forward for the future would be for us to learn from that and verify whether something is fake before we post something.” She highlighted that sometimes, hate speech can instigate violence, so she will be looking at how we can educate and empower youth to be ethical citizens online.

Join their panel for a timely and interesting discussion on the freedom of religion or belief focusing on social histories, contemporary issues, and the way forward to build a more inclusive Sri Lanka. The webinar will be held via Zoom and will be live-streamed on Facebook.

Reimagine the future for every child

December 8, 2021 byNews Admin No Comments
UNICEF marked its 75th anniversary and the Convention on the Rights of the Child by hosting a panel discussion titled “Reimagine a future for every child” reflecting on the progress made over the year

September 22, 2019 byThe Sunday Morning No Comments
With only 35% of land under adequate protection, and 30 organisations and 15 laws harnessing direct involvement with biodiversity conservation,