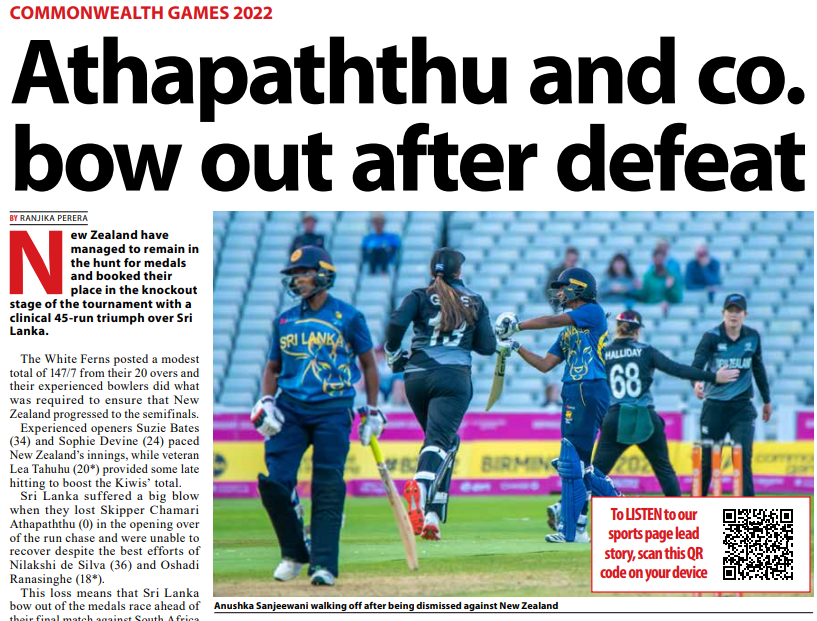 COMMONWEALTH GAMES 2022: Athapaththu and co. bow out after defeat

New Zealand have managed to remain in the hunt for medals and booked their place in the knockout stage of the tournament with a clinical 45-run triumph over Sri Lanka.

The White Ferns posted a modest total of 147/7 from their 20 overs and their experienced bowlers did what was required to ensure that New Zealand progressed to the semifinals.

Sri Lanka suffered a big blow when they lost Skipper Chamari Athapaththu (0) in the opening over of the run chase and were unable to recover despite the best efforts of Nilakshi de Silva (36) and Oshadi Ranasinghe (18*).

This loss means that Sri Lanka bow out of the medals race ahead of their final match against South Africa today (4), while New Zealand take on England on the same day to see who finishes on top of their group.

Ashen Rashmitha and Malintha Yapa were up against Gambian pair Sainey Jawo and Babou Jarra. After going down in the first set, the Lankan pair came back to win the second set. Unfortunately, they failed to keep up the momentum and lost the game, 15-9.

The women’s pair of Deepika Bandara and Chathurika Weerasinghe came up short against Cyprus’ Manolina Konstantinou and Zoi Konstantopoulou. The Lankan pair was defeated in straight sets, 21-8 and 21-10.

Sri Lanka bowed out of the mixed doubles round of the 32 fixture yesterday (3). Sinaly Chanithma and Wakeel Shamil were up against the Pakistani pair of Zafar Faiza and Iqbal Nazir who won the game in straight sets.

Rukmal Prasanna and Sanjeewani Muthuthanthri both registered wins in their round of 16 bouts in their respective categories. Unfortunately, Niklas Vittalis was unable to proceed to the quarterfinals.

Prasanna beat Shaffi Bakari Hassan of Kenya in his bantamweight (51-54 kg) bout by 3-2, while Muthuthanthri stormed her way over Mehreen of Pakistan by unanimous decision in the featherweight (54-57 kg) category. Vittalis faced a tough loss in his light-middleweight (67-71 kg) bout 5-0 to Faustino Ah Tong of Samoa.

Kalinga Kumara managed to narrowly secure a spot in the Men’s 400 m semifinal after clocking 46.53s in Heat 1 of the event yesterday. He was placed fourth in the heat but he was one of the fastest losers after the completion of all seven heats, which secured him the spot in the semis.

September 4, 2019 byTSM Web Desk No Comments
Kusal Mendis and Shehan Jayasuriya are unlikely to feature in Sri Lanka’s third T20I against New Zealand, since both suffered leg injuries while fielding in the second T20I game  in Kandy on Tuesday,