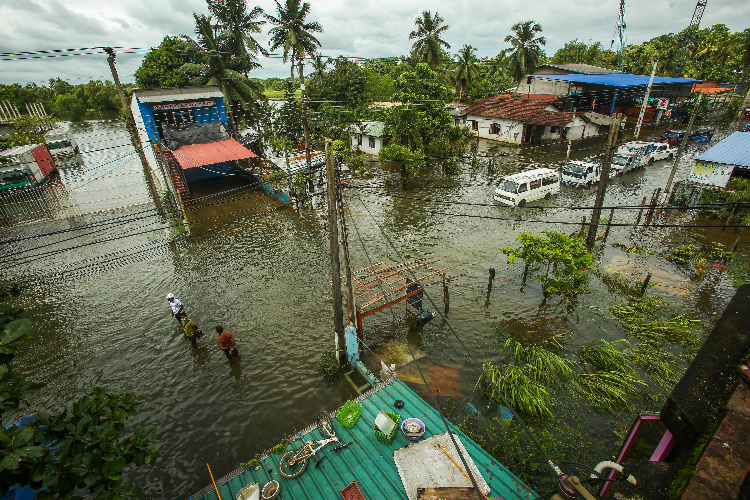 The floods in Kaduwela caused by the adverse weather last week

The southwestern monsoon unleashed torrential rains, ravaging 10 districts in the western and southern parts of the country over the past few weeks. Compensation payments for the affected are currently under calculation while monies have been allocated to the relevant district secretaries.

While floodwaters have slowly started to recede, thousands have been displaced, and multiple casualties have been reported from across multiple areas that were battered by a heavy downpour.

According to the Disaster Management Centre (DMC) situation report, from 6-8 June, nearly 176,419 persons of 44,946 families across 10 districts were affected owing to the adverse weather conditions.

The death toll attributed to adverse weather has now risen to 20. Five persons have sustained injuries, whilst a total of 2,905 persons from 747 families have been moved from affected areas, and are housed at 60 safe locations operated by the district-level disaster management units, in compliance with the Covid-19 prevention health guidelines; another 5,084 persons from 1,442 families have been sheltered with their relatives, The Sunday Morning learnt.

With the Kelani, Gin, and Nilwala Rivers breaking banks, many low-lying areas have been inundated with floods, even though there seems to be a slight reduction in the downpour over the last couple of days. 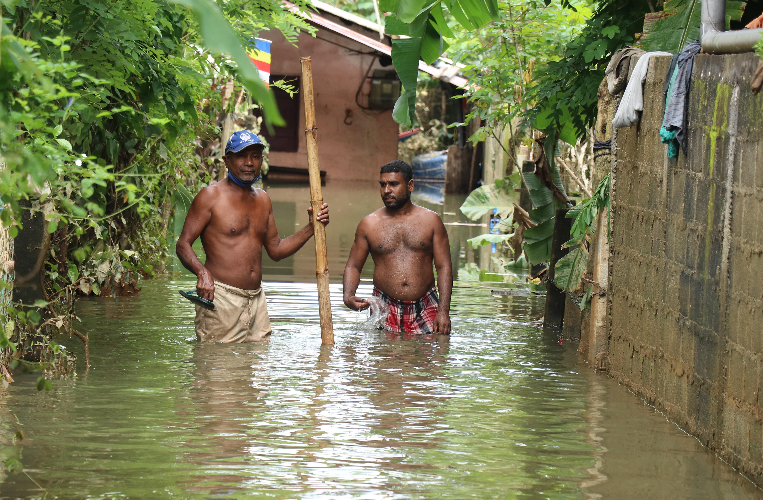 The floods in Malwanna caused by the adverse weather last week

However, according to the Department of Meteorology, fairly heavy rainfall above 75 mm can be expected in some places in the Sabaragamuwa and Western Provinces and the Galle, Matara, and Nuwara-Eliya Districts, The Sunday Morning learnt.

Against this backdrop, the DMC, the military, health authorities, as well as public administration authorities have been working in collaboration to provide relief assistance to the victims throughout the past few weeks, including those who were displaced or were evacuated.

According to Kodippili, nearly 30,000 persons are being accommodated at temporary safe evacuation centres and the assessments of the damages that have been incurred to properties have commenced.

Reiterating that compensation would be provided to those who have suffered property damages at the hands of the adverse weather conditions, Kodippili went on to say: “Funds have been released to the district secretaries, but the allocation of the funds would have to be determined after looking at the number of people that have been affected, and assessing the damages.

“District secretaries have been tasked with assessing the damages and determining the sum that would be paid as compensation,” Kodippili further elaborated.

Kodippili went on to say that relief programmes are underway to assist the affected families through the district disaster management units, under the supervision of the district secretariats along with the assistance of DMC officials.

“If there are any problems in the assessment process or compensation, people can contact us via the 117 hotlines and we will make sure their grievances are addressed promptly,” Kodippili said.

A minimum of Rs. 10,000 and up to Rs. 250,000 would be given out to those who have been affected after taking into account the damage that has been incurred to property, The Sunday Morning learnt.

A total of Rs. 270,000 had been allocated for cooked meals for the people across all the districts that have been affected, according to Maj. Gen. Ranasinghe.

“The allocation of funds would be as per the requirement, and there is no price ceiling. Whatever divisional authorities would decide, the Treasury would provide the amount,” Maj. Gen. Ranasinghe elaborated.

There were several disaster incidents in the years 2016 and 2017 – the floods, the landslide in Aranayake, the Meethotamulla disaster, etc. However, the figures mentioned above are only in reference to the southwestern monsoon.

“The compensation was dispersed in instalments so that those who had been affected and suffered property damage could build their houses again.”

Compensation for the calamities that have occurred in the past had been dispersed in instalments which had taken a significant amount of time, according to Maj. Gen. Ranasinghe, while the instalment plan had been put in place to make sure the people used the funds to rebuild their properties, The Sunday Morning learnt.

According to Maj. Gen. Ranasinghe, a family that had tested positive for Covid-19 had been transferred to an intermediate care centre, instead of being taken to a safety centre.

He went on to say that this had been done under the supervision of the health authorities, adhering to the Covid-19 safety guidelines.

Furthermore, the National Building Research Organisation (NBRO) has issued landslide warnings for the Kalutara, Ratnapura, Kegalle, and Nuwara Eliya Districts and has requested the people living in these high-risk areas to move to safer places.

Several studies conducted by the NBRO state that nearly 20% of lands in the country are prone to landslides, of which most are situated in the central highlands, and nearly 30% of Sri Lanka’s population are estimated to reside in these landslide-prone areas.

Unauthorised constructions, dumping of waste, and general neglect have limited the canals’ ability to hold and carry water over the years, which has proven to be disastrous for flood control programmes.

Speaking with The Sunday Morning, Sri Lanka Land Development Corporation (SLLDC) Additional General Manager Eng. C.B. Amarasinghe stated: “The SLLDC’s main responsibility is to control floods in the Colombo Basin, in addition to that, we also focus on flood mitigation in the Kolonnawa Basin as well. We are taking several precautionary measures to mitigate situations like this.

“In the Colombo Basin, which has five main draining outlets – Dehiwala, Wellewatte, Mutwal, Beira outlets, etc. – every year, before the monsoons begin from April to June and from November to January, we carry out maintenance work in these canals, as there is a significant level of waste being dumped into these canals which has led to situations we now see today.

“In the Colombo Basin alone, there are nearly 44 km of canal sections to maintain; however, we are trying our best to mitigate the present situation by using pumping stations to pump the receding water into the Kelani River and Beira Lake to reduce the flood levels in the Colombo areas.”