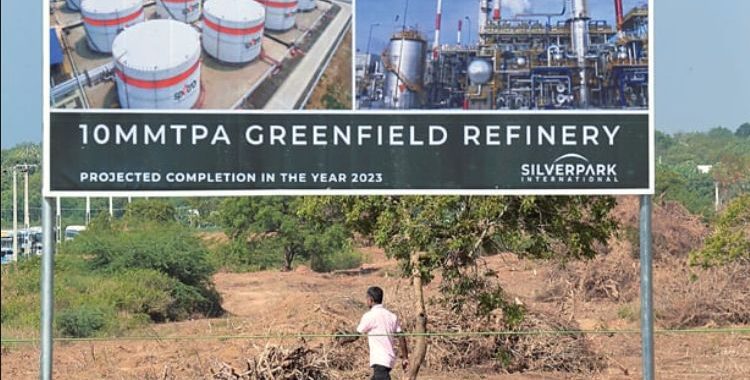 Construction of the proposed controversial $ 3.85 billion oil refinery project in Hambantota has begun, but a 99-year land lease agreement is yet to be signed.

Development Strategies and International Trade Deputy Minister Nalin Bandara told The Sunday Morning that, while agreements related to the project had been signed, the lease agreement for the land was not yet inked.

The agreement is to be signed between the Government and the main investor, a Singaporean company, Silver Park International (Pvt.) Ltd.

The main investor is Singapore-based Silver Park International (Pvt.) Ltd., owned by the family of Indian politician Dr. S. Jagathrakshakan, a senior DMK leader, while Oman Oil Company had proposed an equity stake of up to 30%.

“We have to sign only the lease agreement for the land and other than that, all other agreements had been signed between the Government and the company,” he reiterated.

The Government had already received 10% of the total investment of $ 3.85 billion, he said.
Meanwhile, a Sri Lankan delegation led by Ministers Kabir Hashim and Malik Samarawickrama will leave for Oman on 4 May to hold further discussions with the Government of Oman regarding the oil refinery project, Bandara said.

The oil refinery project which is supposed to be one of the biggest investments in the country, totalling around $ 4 billion, is subject to criticism by various interested parties who claimed that the project is another suspicious deal by the Government.

Issuing a press release, the TISL said the main investor in the project, Singapore-based “investment vehicle” Silver Park International Pvt. Ltd., is a company controlled by the family of Tamil Nadu politician and former Indian Union Minister Dr. S. Jagathrakshakan, whose business interests have been previously implicated by Indian authorities and the media in several alleged corruption scandals.
It also revealed that of the 40 FATF recommendations which set the international standards on combating money laundering, the 12th recommendation requires that reasonable measures be taken to ascertain the source of wealth and funds in transactions involving politically-exposed persons.
In responding to the allegation levelled by the TISL, the Board of Investment (BOI) clarified that the Foreign Direct Investment (FDI) brought into Sri Lanka, including the oil refinery project in Hambantota, was channelled through the approved local banking system through Inward Investment Accounts (IIA) as per the Foreign Exchange Act and its regulations in Sri Lanka.

In the case of the project, all financial transactions by the investor are routed through a reputed commercial bank in Sri Lanka. All commercial banks have their own AML/CFT regulations, which are also carefully monitored by the Financial Intelligence Unit of the Central Bank of Sri Lanka, the BOI said.

Former BOI Chairman Upul Jayasuriya PC said: “In terms of investment into the country, we do everything possible to attract it and the rules do not matter very much. If they are satisfied that these people are bringing money into the country, they discuss what money it is and that there are so many channels created by law.”

He also said: “As a country, we should be encouraging these investments. It may happen in the way that they are saying – maybe slightly different, it doesn’t really matter. If you want to lay the foundation stone and if a minister is coming, it’s fine, you must accommodate him. We must give all the encouragement necessary.

“When I was Chairman of the BOI, every month, we terminated more than 15-20 agreements that were signed. However, that doesn’t mean that you can put the blame on the BOI. The money that comes into the country goes through a screening process and black money is not accepted. It doesn’t matter if a politician is behind this. We have to have a positive outlook,” he added.

January 16, 2021 byLahiru Pothmulla No Comments
The Director General of Health Services has granted the approval to resume tuition classes from January 25, the Ministry of Health said today.

Musical hallucinations and the psychiatric approach