The backlash targeted at the cabinet decision over revoking Circular 5/2001 seems to have temporarily suspended any further discussions on the matter.

The Sunday Morning was told that a stakeholder meeting was to be called at the request of the President earlier that week. However, when the President’s Media Division (PMD) was contacted, it was learnt that the meeting had not taken place.

Furthermore, the protest that was to take place on 13 July with the participation of environmental and multisectoral organisations in front of the Ministry of Environment was also postponed indefinitely with the recent spike in Covid-19 cases in the country.

The protestors were to urge the authorities to continue enacting Circular 5/2001 which protects other state forests of the country.

The Cabinet of Ministers was to reassign the legal authority to make decisions of such forests from the Forest Department to the divisional and district secretariats to decide and allocate the forests for cultivation and development purposes for the residents of the respective areas.

Centre for Environmental Justice (CEJ) Executive Director Hemantha Withanage told The Sunday Morning that while a meeting had taken place, to which the Forest Department Commissioner had participated, the issue over revoking Circular 5/2001 had not been brought up.

“I think the Government will reconsider the decision since there were many concerns raised by environmentalists. With the Covid-19 pandemic still prevalent and many patients being reported, their focus has now turned to healthcare-related issues and then the upcoming election.”

Withanage pointed out that the President had appointed a committee to look into the possible impact it would cause should the other state forestlands be repurposed for cultivation or development work, adding that neither an environmental organisation representative nor a Forest Department official was included in that committee to advise on the adverse effects of destroying these forests.

Earlier last week, many environmentalists and environment conservation groups raised concerns over the Cabinet approving the repurposing of other state forests for cultivation and development projects,which later on prompted the President to advise the Cabinet of Ministers to reconsider the decision.

The Cabinet is to act on the recommendations that would be put forth by the special committee appointed to look into the matters. 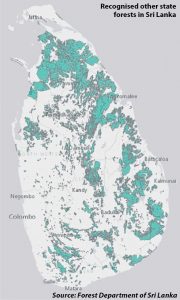 Rainforest Protectors of Sri Lanka (RPSL) Chief Co-ordinator Jayantha Wijesingha, speaking to The Sunday Morning, said that the Swarnabhoomi and Jayabhoomi deeds were issued to families under the divisional secretariats in the guise of agriculture permits, residential land, as well as various permits that allowed farmer families to build temporary buildings in such land expanse at a grand scale before 2001.

“At the time, Minister of Mahaweli Development and Environment Maithripala Sirisena decided that it should not happen anymore and declared that all forests belonging to the State must be transferred to the Forest Department. Despite that, the divisional secretariat and the district secretariat ignored the due process and continued to issue permits as and when they preferred, the politicians asked, or they thought it fit.”

Such activities are prevalent, especially in the divisional secretariats of Welikanda and Thamankaduwa, Flood Plains National Park located in the Polonnaruwa District (belonging to the DWC), Kumbukkan Oya Reservoir in Monaragala, Kotiyagala Forest, Wattegama Kebilitta Forest Reserve, and Forest Department-owned land for which the Siyambalanduwa Divisional Secretariat had issued permits, Wijesinghe noted.

“Already the divisional secretariat and the district secretariat have issued permits to land owned by other state institutions which are outside their jurisdiction. We have observed that such permits have been issued for land areas located in the other state forests that have been recognised under Circular 5/2001.”

Among the illegal projects, the divisional secretariats have issued permits to carry out activities that disturbed the ecosystem and biodiversity of the recognised other state forests. Wijesingha revealed that in Embilipitiya, there was one incident where the divisional secretariat had issued a permit to operate a quarry within a teak and mahogany plantation that was overseen by the Forest Department.

“In Dambukanda, there is an area recognised as an ‘other state forest’. The Divisional Secretariat has issued several permits allowing people to cut down the forest and form settlements and cultivation areas. These are just a few examples on how the authorities have manipulated other state forests and allowed such areas to be destroyed in a haphazard manner,” Wijesingha stressed.

Consequences of repealing the Circular 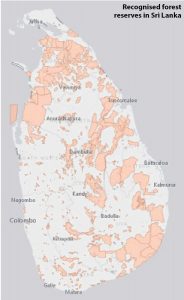 According to environmental lawyer Jagath Gunawardana, if these ecosystems that are thriving within the other state forests are destroyed, endemic species will be driven to a point of extinction since their only habitat is situated within such unique climate zones. Continued deforestation could therefore deprive these species of most of their habitats.

“Animals that travel a lot or migrate use these forests to move from one area to another. The most common among such animals is the elephant. As a result of destruction and increasing human intervention, the human-elephant conflict in particular would elevate too. The leopards in the mountain regions are mostly resident in these types of forests in the Central Hills. Their traditional trails and hunting grounds are also located in these other state forests. Hence, as a result of increasing clearances, leopards will intrude human habitats, triggering responses by the villagers in terms of traps and snares,” Jayawardana noted.

Gunawardana further elaborated, saying: “Even if the ownership of these lands are said to be retained by the Government, the previous practice has been to give out lands on a long-term lease basis to private owners, thus creating a defacto ownership situation on the part of the private persons.”

Contradicting decisions of the State

Environmental Foundation (Guarantee) Ltd. in a statement issued recently stated that the cabinet decision to reconsider and repeal Circular 05/2001 comes at a time when the existing forest areas in the country are fast dwindling and the current Government has committed to increase the forest cover in Sri Lanka to 32% by 2030.

“In 2006, there was an amendment to the Circular (02/2006) which re-vested the non-forest areas within other state forests. Hence, land has already been given out for agricultural and other purposes. If more land is to be allocated by any additional changes to the existing Circular, then it would directly affect the protection afforded to the forest areas within other state forests,” the statement indicated.

Therefore, if the powers over other state forests are reverted back to the district and divisional secretaries, the question as to whether protection would be afforded to these regions remains under serious doubt. More question as to whether the district and divisional secretariats would carry out land allocation activities by paying due regard to land use and biodiversity policies, climate change considerations, and the human-animal conflicts would also remain unanswered.

While it is necessary to ensure the lands are used for development or cultivation purposes, according to the land use policies, and give due consideration to the environment and its value, another concern to take seriously is to weigh in whether the district and divisional secretaries are the best institutions to handle such a task.

Decision to revoke hangs in the balance

“We have not taken a decision to go ahead with the thought of revoking Circular 5/2001 that is currently protecting other state forestlands under the purview of the Department of Forest Conservation. During the cabinet committee meetings this week we could not discuss the matter. Since there was massive public uproar on revoking the circular, the President too instructed that the relevant stakeholders should have a discussion on the negative impacts and gather feedback,” Co-Cabinet Spokesperson and Minister of Plantation Industries and Export Agriculture Dr. Ramesh Pathirana noted.

He too affirmed that a committee has been appointed to assess the situation and if the circular is to stand, the Government will need to look at demarcating these forestlands as stipulated by the Forest Department.

For the last five decades or more, farmer families have been issued permits to cultivate and set up temporary lodging within these other state forests. Dr. Pathirana noted that should Circular 5/2001 stand, these families who have been residents of such plantation activities will need to be moved out of the forest perimeter and provided different land plots to continue their cultivation.

“All in all, an impartial decision needs to be taken on the impacts it can cause to the environment as well as the farmer families that live within these protected forest areas,” Dr. Pathirana said.

All attempts made by The Sunday Morning to contact the Minister of Environment proved futile.

‘Residual forests’ vs. other state forests

At the outset, the terminology needs to be clarified regarding other state forests and residual forests. Under the provisions of the Forest Ordinance No. 16 of 1907, there are three types of forests in Sri Lanka under the Forest Conservation Ordinance: Conservation forests, reserved forests/forest reserves, and village forests – all of which are afforded legal protection under the said legislation.

Environmentalist and Attorney-at-Law Jagath Gunawardana explained that the decision in fact pertains to the areas which are not declared under any other enactment are called “other state forests” which come under the purview of the Forest Department, subsequent to Circular 5/2001. Hence, these forests are not residual forests in any sense of the word, but refer to other state forests that constitute more than 7% of the land cover of the country.

Ignoring the elephant in the cage

A power crisis in the making?

December 18, 2021 byNews Admin No Comments
Can we even identify ourselves as Sri Lankans if we have not had a power cut on a Sunday we were hoping to watch Netflix and chill, throw a small party, or – let’s be honest – just to take a really lo