January 13, 2020 by Skandha Gunasekara No Comments 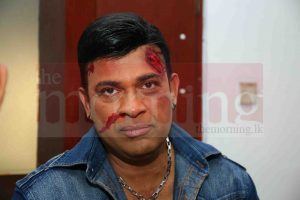 The Sunday Morning caught up with the man of the hour – actor-turned-politician, United National Party (UNP) MP Ranjan Ramanayake. He was in the midst of a shoot for his upcoming movie when he met with us to discuss the recent revelations that were made as a result of his recorded telephone conversations being leaked through social media, thereby stirring up major controversy. Below are excerpt of his interview with The Sunday Morning:

Q: Your voice recordings which were leaked to the media are causing major controversy because of the information that has been disclosed. What more information do you have to reveal?

Honestly, I have a lot tucked away. Many bits of controversial information are still hidden away. All this information will benefit the people of this country, not me. It will reveal to the people what is really going on in society these days – political or otherwise.

Q: Who does the hidden information in your possession concern? Does it concern anyone reputable?

The hidden information concerns people who are considered to be in the highest standings of Sri Lankan society. From political leaders to businessmen, all are implicated.

Q:Some of the leaked recordings contained conversations between you and judges, which has cause to prompt even more controversy. Were these leaked by you intentionally or did someone leak them to tarnish your image?

Actually, I wish I could answer this question. But at present, there are ongoing court proceedings as well as investigations being carried out with regard to how these recordings, which were in police custody, made its way to the media. Therefore, I cannot speak of it yet. However, it will be good if a presidential commission is appointed in this regard; it will ensure proper transparency in the investigations. All will be revealed soon enough.

Q: The Police claim to have uncovered some 120,000 of your voice recordings, out of which some have been leaked, incriminating various people including politicians, members of the judiciary, and even actors and actresses. Who else do these recordings include?

Q: Are these politicians in the Government or the Opposition?

They are from both sides of the aisle. 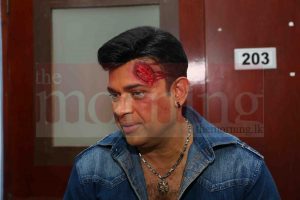 Q: What is to happen next?

All these things I’ve done are for the people. Even when you call a bank, there is an automated message that says the call would be recorded to provide a better service. That is akin to what I’ve been doing. I did things like recording calls and such for the benefit of the masses. I have acted like a spirit, finding out all the dirty secrets from right under the noses of those who are supposed to be serving the people. I have worked undercover on a solo mission to expose the corruption and illegal activities of our politicians. President Gotabaya Rajapaksa carried out an unannounced spot inspection of the Department of Motor Traffic (DMT) recently to catch the crooks there. I like that initiative the President took. Similarly, I expect the President to initiate an independent inquiry into my revelations and take necessary action against the culprits.

Q: Many have charged that the way you went around acquiring these phone call recordings was unethical. What is your opinion? Did you have to resort to such subterfuge to obtain this information or did you have other avenues?

My narration of this (situation) is that all those who are condemning me are the thieves who are guilty. When a new, state-of-the-art scanner to detect drugs was brought down to Sri Lanka Customs at the harbour, who opposed it? All those who smuggle drugs and ethanol. Some time back, MP (Palitha) Range Bandara released a phone recording of S.B. Dissanayake who was enticing him with a ministerial portfolio for his vote during the constitutional coup. Would a news outlet such as yours believe him just claiming that S.B. Dissanayake tried to bribe him if he had not released that phone call recording? Similarly, there were claims that I was lying about the allegations I made and demanded that I show evidence. So now, I will answer all those (demands) with the evidence that I collected.

Q: Do you know anything about the forensic audit into the Central Bank?

I’d like to answer that in time to come, when more things about the forensic audit have come to light. Only then would it be meaningful.

Q: But do you have information on the forensic audit reports?

Yes, I have details and information.

Q: When you were leaving the court premises recently, you said that you have more information to reveal. Will you do so?

Yes, of course I will. The protection I had all this time has been greatly reduced. I even got a pistol for my own safety and underwent Special Task Force (STF) training with the pistol, but now they have confiscated that too. Nevertheless, I will continue to fight. I may at times have to take a few steps back, but I will always continue my fight against corruption on behalf of the people of this country.

Q: What kind of threats or intimidation do you expect/receive?

Certain media institutions tried to get me on their side to defend their criminal activities, such as the murder of Bharatha Lakshman (Premachandra). If I had taken the side of that particular media mogul, then I could have been even more rich and famous with the opportunities they would have given me, but I took the side of the victim. So now, that media institution continuously slings mud at me.

Q: You said that you have incriminating information about the wives of some politicians. What does such information pertain to?

Well, I have evidence of how they have bought luxury houses in Colombo as well as in foreign countries, how they have procured diamonds and gold illegally, etc. So many people said that I had no evidence (to back these claims), but in fact I do have evidence – medical reports, police B-reports, certified copies of documents, receipts, and bills. I have everything.

Q: So is this evidence not currently in the hands of the Police?

Yes. I have used many undercover methods to gain this information. Just like they (the Police) go undercover to bust prostitution at “spas”, I too have gone undercover to spas to obtain information about the drug business of these spa owners.

In the recent past, people accused me of not revealing the names of politicians who used cocaine, but now they have all come to light through my phone conversation recordings with actresses and models. I have revealed how cocaine was brought in McDonald’s bags into nightclubs. Someday, people will understand my struggle.

Q: You have spoken to many police officials including those in the Criminal Investigation Department (CID), such as its former Director Shani Abeysekara. How do you hope to provide them with protection for providing you with information?

I am a member of the Committee on Public Enterprises (COPE) which probes into fraud and corruption in state institutes. We have summoned chief ministers and cabinet ministers. We once summoned the Sri Lanka Cricket (SLC) Chairman, and during the time Janatha Vimukthi Peramuna (JVP) MP Sunil Handunnetti was the Chairman, we even summoned former Central Bank Governor Arjuna Mahendran. I’m also in the Sectoral Oversight Committee on Legal Affairs (anti-corruption) and Media. The aim of these committees is to curtail corruption; in my opinion, corruption can never be eradicated.

So yes, I have spoken with many officials including those in the Financial Crimes Investigation Division (FCID), CID, Commission to Investigate Allegations of Bribery or Corruption (CIABOC), and even presidential commissions. I will always protect the identities of my informants as I did all this time. Their identities were revealed through the leak and not by me. These recordings are both beneficial and detrimental to me. However, as there are ongoing court proceedings in this regard, I do not wish to say more.

Q: Your party seems to have distanced itself from you. What is your future with the party?

On 8 January 2015, the slogan of our party was to close down the airport and catch all the thieves, but all that has been forgotten by the party, because of which I am very disappointed. I kept some of those who were connected to these thieves in my own home – I hid Gamini Senaratne’s driver in my home. He had so much evidence with him. And now, that driver has gone missing. I tried to protect them. In the end, we found out that Gamini Senaratne himself was hiding inside a known politician’s house. So it became clear that there were various people safeguarding these thieves, so I decided to endure this struggle on my own.

Some claim that I influenced the court, but I don’t accept that. Justice Sarath Ambepitiya was murdered in front of his own house after he gave a ruling against drug kingpin “Kudu Naufer”. After that, many judges were afraid to pass judgements on drug lords. The Government was struggling to find judges who were brave enough to prosecute drug kingpins. I have arranged protection for the children of certain judges. With regard to the controversial court case in concern, I wasn’t the one who passed the judgment; Buwaneka Aluwihare, Vijith Malalgoda, Sisira De Abrew, Priyasad Dep, late Prasanna Jayawardena, Morais, Padmini Gunatilake, and Shiran Gunaratne are the ones who gave the same verdict. How can I give a verdict? There are two vehicles with gunshot holes, over 120 empty bullet shells, and a T-56 rifle used at Elephant Pass, and now they say “Ranjan influenced the court”.

Q: Are the judges you just mentioned the only ones you spoke to?

Let me reveal that later.

Sunny Side Up: Learn or depart?

May 2, 2021 byNews Admin No Comments
Opposition Leader Sajith Premadasa recently asked the people who are obstructing his journey, to leave the party.

July 3, 2021 byNews Admin No Comments
The current state of the country’s foreign reserves and its notable decline has become a hot topic, with concerns being raised over many related issues while local banks are reportedly facing difficul