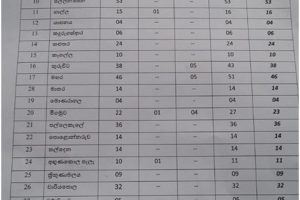 More than 500 prisoners received presidential pardon, some of whom were later remanded.

According to official statistics, a total of 545 prisoners were pardoned on 4 February, but only 518 were actually freed. The remaining 27 prisoners who were pardoned still remained in remand.

These include 13 from Welikada, five from Kuruwita, five from Mahara, and four from Negombo prisons.
When The Sunday Morning contacted the Ministry of Justice to inquire about the 27 prisoners still in custody, the Ministry’s legal division refused to comment.

However, another official stated that they were only pardoned from one offence and were still in remand over their other offences.

According to Article 34 of the Constitution, the President is empowered to grant a pardon to convicts, but in cases where an offender was condemned to death by a court, a pardon can be granted only after the judge who handed down the sentence forwards a report to the Attorney General, who in turn sends it with his advice to the Minister of Justice. The report is then forwarded to the President with the necessary recommendations and based on that, a pardon can be granted.

Explaining the entire process of the presidential pardon, a senior lawyer who wished to remain anonymous said: “The ‘presidential pardon’ is an act we inherited from the British. This act was known as the ‘The Royal Prerogative of Mercy’ and was later dubbed the ‘President’s Pardon’, according to the Constitution of Sri Lanka.

“In 2018, 432 prisoners were pardoned and according to research, not many circumstances were found where convicts granted pardons were remanded in prison, as to be granted the ‘the presidential pardon’ is a privilege.

“It is unethical to re-remand prisoners who were afforded the presidential pardon,” he stressed.

“The action of pardoning prisoners has been carried out throughout generations of presidents and kings, and there were seldom reports on convicts who were remanded after being granted the pardon.

“It is a question as to why they cannot disclose to the public the real reason behind these convicts being in remand,” the senior lawyer added.

The above was also confirmed by the Bar Association of Sri Lanka (BASL) President U.R. de Silva, who refused to comment any further.

Meanwhile, former Justice Minister Wijeyadasa Rajapakshe said that during his tenure, the criteria, proceedings, and documents in relation to presidential pardons in courts were made public as they were closely related to the public.

Rajapakshe also said that pardons are usually given to prisoners facing minor charges, explaining that it was unethical to remand prisoners who were granted the presidential pardon.

Rajapakshe said that he was unaware of why the prisoners were remanded this time.

Article 34 of the Constitution

34. (1) The President may in the case of any offender convicted of any offence in any court within the Republic of Sri Lanka –

(a) Grant a pardon, either free or subject to lawful conditions;

(b) Grant any respite, either indefinite for such period as the President may think fit, of the execution of any sentence passed on such offender;

(c) Substitute a less severe form of punishment for any punishment imposed on such offender; or

(d) Remit the whole or any part of any punishment imposed or of any penalty or forfeiture otherwise due to the Republic on account of such offence:

(a) Grant a pardon, either free or subject to lawful conditions, or

(b) Reduce the period of such disqualification.

(3) When any offence has been committed for which the offender may be tried within the Republic of Sri Lanka, the President may grant a pardon to any accomplice in such offence who shall give such information as shall lead to the conviction of the principal offender or of any one of such principal offenders, if more than one.

A new hope for the world: Covid-19 vaccine

February 7, 2021 byNews Admin No Comments
Amidst a global pandemic, it was with much anticipation that the introduction of the Covid-19 vaccination took place. While many affluent countries have initiated vaccination programmes..

May 27, 2019 bythemorninglk No Comments
China's footprint in Sri Lanka is set to expand with Chinese firms now being shortlisted for the proposed Light Rail Transit (LRT) project as well.