Controversy over the Galle Marina Project 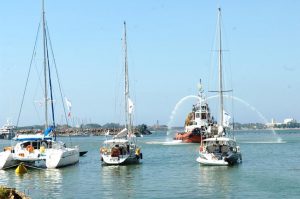 The Galle Marina Project, which aimed at making the Galle harbour a tourism port, has become the focus of criticism from some politicians, who have said it would damage the harbour and historical Rumassala Mountain.

However, the Ports and Shipping Ministry said it had only called for Requests for Proposals and no decision had taken regarding the proposed Galle Marina Project.

Secretary to the Ministry of Ports and Shipping L.P. Jayampathy told The Sunday Morning that a tender board had not yet been appointed and the request for the project had come from the Sri Lanka Ports Authority.

Request for proposals had been received by various parties and they were yet to be discussed, he said, adding that they had not yet decided to which company the project should be handed over.
He claimed that a date for the meeting had not yet been finalised.

The Ministry had invited sealed applications from interested parties, on 24 May, to submit for proposals and the receipt of award of Build-Operate-Transfer (BOT) concession for the projects; the bids closed on 21 August.

Meanwhile, Telecommunication, Digital Infrastructure and Foreign Employment Deputy Minister Manusha Nanayakkara alleged that the tenders had already been called for the project; which the Galle Development Committee or the Development Project Committee had not yet been informed of.
The UPFA MP alleged that the Government was planning to sell a section of the Galle harbour to a foreign company.

“The project was proposed by a foreign company and it was reported that the tenders have been called by only enabling the said company to get the project,” the Deputy Minister alleged.
According to him, there were only four bidders from Switzerland, France, and India for the project at the time it was open to bidding.

In addition, he said that there were plans to open an Immigration and Emigration Office in Galle and also Duty Free shops to facilitate the tourists.

The Deputy Minister urged the Government to do an Environmental Impact Assessment (EIA) and an assessment to identify the effects of the historical value of the city.

“The Government should also assure the residents in the Galle District that there would be no threat to its security by directly opening the city for tourists,” he stressed.

It was reported that the estimated cost for the Galle Marina Project was Rs. 12.89 billion and the first phase entails the construction of a yacht marina for tourists drawn in by the region’s coral reefs, tropical rainforests, and white sand beaches.

It also includes construction of berthing facilities for 22 15-metre-long yachts at a southern breakwater area, a service and repair facility, a duty free shop, café, clubhouse, and a tourism information centre.
The project’s second phase will see the construction of a breakwater to protect the entire bay, as well as a hotel and resort facilities, a yacht marina, and a multi-purpose berth.

September 26, 2021 byRuwani Fonseka No Comments
The locally mutated Delta variant of Covid-19 which displayed A701S, A222V and A1078S spike protein mutations has now been named as AY.28, The Morning learns.

Speaking to The Morning, Sri Jayewarden