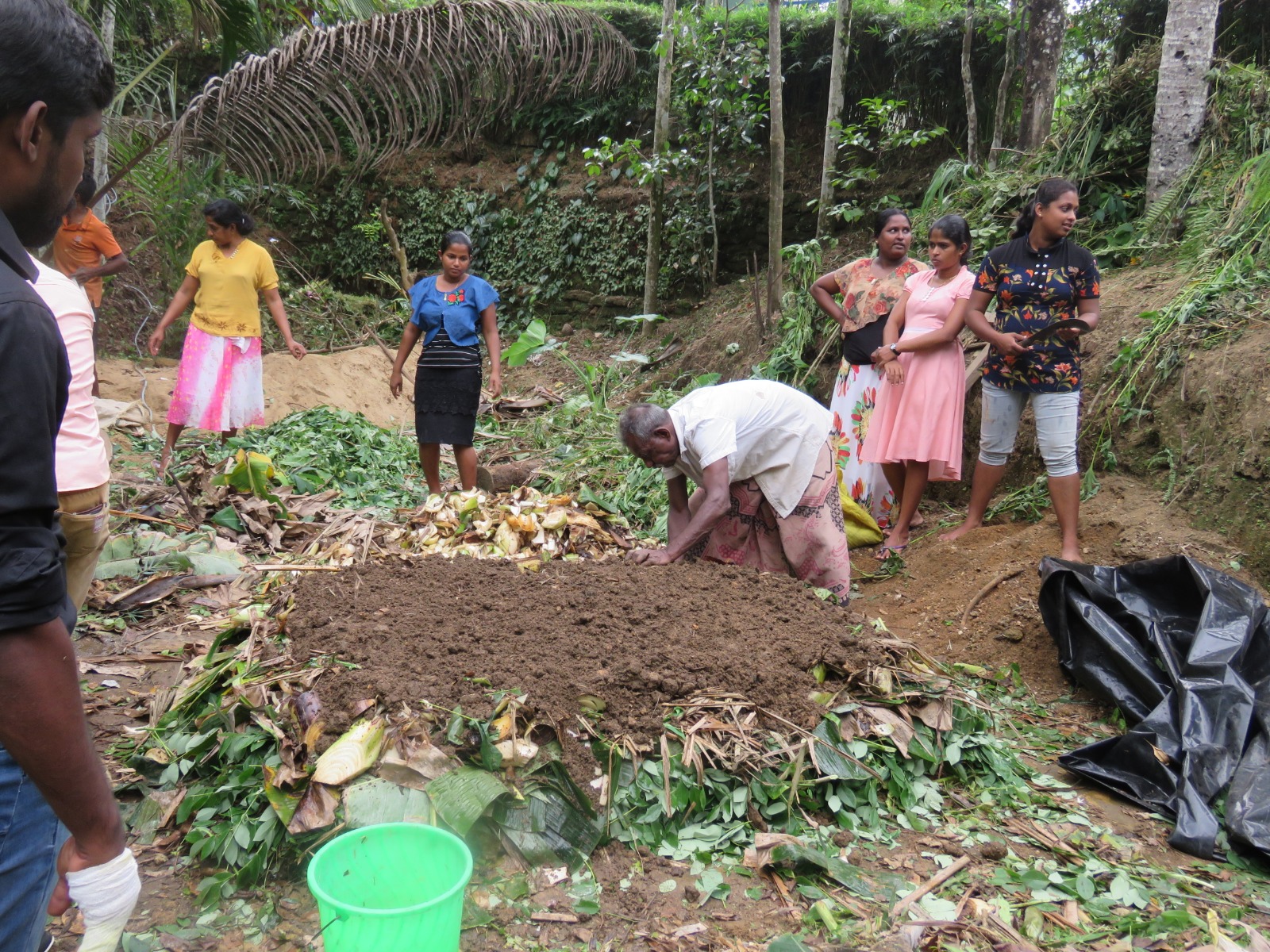 ‘Conversion period to organic farming should be minimum of two years’

However, farmers’ rights groups have raised concerns over the predicted drop in yield due to an immediate transition to organic farming, noting the serious effects this would have on their crops. The Lanka Organic Agriculture Movement (LOAM) has been a pioneering group of professionals who have promoted and facilitated organic farming in Sri Lanka.

LOAM President Thilak Kariyawasam is critical of the sudden ban on chemical fertilisers and stressed the need for a sufficient transition period for farmers to adapt to organic farming.

The Morning spoke to Kariyawasam in this regard and his alternative suggestions to the Government.

Following are excerpts from the interview.

Could you give us a brief introduction to LOAM and the type of work the organisation is involved in?

LOAM was started in 1992 by the pioneering group on organic agriculture in Sri Lanka. People from NGOs, plantation companies, farmers’ groups, etc. were involved in the start of it. They attempted to model organic agriculture in a way that is suitable to Sri Lanka, considering the many possibilities in the country. Sri Lanka’s and the world’s first certified organic tea estate, Needwood Estate, was started by Denzil Soyza, who is also a part of the LOAM. It took him four years to convert his estate into an organic estate. They wanted to establish it as a scientific method of farming that goes beyond our traditional farming methods.

There were four main responsibilities of the LOAM: Promote it, make the necessary laws and regulations, market it, and create a certain standard of certification. We were also involved in the establishment of an “Organic Product Council” under the Ministry of Environment in 2005, which helped promote organic farming. We also laid the path for organic farming certification. In 2009, the Sri Lanka Standard Institute (SLSI) led the way for the organic certification in quality. In 2011, it was made into a law. We are also a part of the International Federation of Organic Movement (IFOAM), and we played a part in establishing the IFOAM Asia as a regional body. 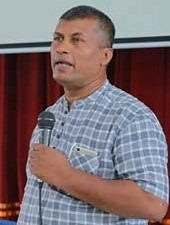 How do you certify that a product is free from ‘poison’?

When you say “there is no poison” (wasa wisa neha), it is a general statement. It is a loose term that is often used for brainwashing. But when you say it is organic, there is a meaning to it. Organic certifications are received according to the location:

You can either get a SLSI certification, or, depending on where you are exporting your product, you can get a certification. There are different ones for places such as the US, the EU, and Japan.

What are the problems that arise when farmers switch from chemical to organic fertilisers?

What is the average transition period for a successful switch from chemical to organic fertiliser?

Normally, we have seen that some soils can be easily converted within three seasons. However, in any international standard of organic farming, two years is the minimum for the conversion period. That is where you are building your soil. After that only you can expect the same yield as you would have got with chemical fertilisers. Sri Lanka’s organic standards state that the transition period for seasonal crops is two years, and for perennial crops, it is 36 months or three years. However, technology could be used to expedite the process. In countries like Sweden, they collect cow urine near the cowsheds through technology into tanks, which is then injected into the soil so that there is no waste. That kind of thing gives an immediate result.

So are you saying this initiative by the Government to completely transition to organic fertilisers by the end of this year would not be successful?

It is not at all practical. There are so many systems in organic agriculture. If you focus on biodynamic agriculture and some other deep systems, you can easily convert into organic farming within a season. But that knowledge is not available here. What the Government is proposing, on the one hand, is that farmers do not have the required knowledge, and on the other, that they do not have the necessary raw materials to switch. The Government thinks that compost is the only solution for this. However, in organic, there is no such thing as only compost can be used.

Compost can also be improved. Merely because urban waste is made into compost, that does not mean the nutrients needed by a plant are available in it. If a plant needs 17 nutrients for growth, with three coming naturally from the outside environment (oxygen, carbon, and hydrogen), then we only target nitrogen, phosphorus, and potassium from the organic fertiliser. The others are obtained from the soil’s biological components. However, due to the large yield we obtain from a particular patch of soil these days, we must give these biological components back to the soil. If we are to give that, we must put a sort of “fixed deposit” on the soil.

What is the first or immediate effect that could happen due to this?

We would definitely face a drop in yield because just because you put compost, or for example, straw, the crops would turn yellow in colour. The nitrogen in the soil would be sucked in by the straw and the crops would lose out on the nitrogen. The yield drop would be the immediate effect.

As a percentage, how much would the yield decrease?

Is this the average figure for all crops or does the drop depend on soil types, location, and the crop?

Which parts of Sri Lanka would be most affected?

The Hill Country and some elevated agricultural areas will be most affected.

However, Sri Lankan farmers have faced a number of problems, including severe kidney disease, due to chemical fertilisers. Would not a ban such as this help combat the problem?

There has been a continuous claim in Sri Lanka that we are not importing good-quality chemical fertilisers. Both the WHO (World Health Organisation) and the Health Ministry have been claiming that when they analyse the fertiliser samples, there are residuals which could mean arsenic and a range of other unwanted chemicals. What we are saying is that this could be stopped by the Government, but do not justify the banning of fertiliser. What the Government has done this time is authorised the import of chemicals, but banned chemical fertiliser.

This is not something that should be done. What should be banned is agrochemicals. In the government extension system, there is no package called organic agriculture. They only have chemical agriculture knowledge. They have no organic agriculture research centres or officers with the necessary organic farming knowledge. We are suggesting that they build up research and resources for five years. Our other proposal is to reduce chemical fertilisers by 20% in the first year and by 40% in the second year. In the third year, reduce the subsidy given to chemical fertilisers. Then, within the (first) five years, officers will be knowledgeable, the seeds necessary for organic farming will be prepared, and the soil will have cleared. That is the action plan we are proposing. However, if farmers are willing to transition within one year, then have subsidies available to help them.

Have you had any discussions with grassroots-level farmers regarding the matter?

Yes. We have discussions with organic farmers who are not heavily impacted by this. However, an immediate transition is not practical.

What actions have you taken regarding the ban? Have you sought discussions with any government authorities?

We have written to the President regarding this, presenting our alternative suggestions. There are certain groups who do not know anything about organic farming who are advising the President. They also badly advised former President Maithripala Sirisena. They give wrong advice to the President and tell him that this type of immediate ban is possible. My warning is that the current President would fall in the same trap the former one did if this is implemented.

July 15, 2021 byNews Admin No Comments
The Attorney General’s (AG) Department has on Tuesday (13) informed the Colombo Magistrate’s Court that an extensive investigation is being conducted into the allegedly erased communications between t