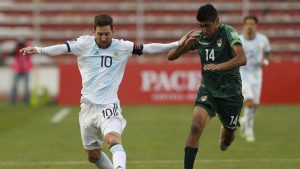 ^ All times in Sri Lanka time

Ecuador earned a deserving draw against Brazil to secure their spot in the quarter-finals on Monday (28). Brazil broke the deadlock in the 36th minute when Neymar’s free kick was headed into the far corner by Eder Miltao. Few minutes into the first half, Angel Mena drew level for Ecuador when Brazil failed to clear the ball and finally the ball ended up falling right in front of Mena, who beat the keeper to score. Brazil’s second-half replacement, Vinicius Junior, missed an easy opportunity as Ecuador held on and secured their place in the quarters. They will be facing Argentina on Sunday (4 July).

Peru beat Venezuela 1-0 to ruin all hopes for Venezuela of reaching the K/O stages this year. Early on, Peru winger Yuton had an easy chance to score but his shot went wide. The best chance for Venezuela came in the first half when Cordova had only the keeper to beat from close range but he ended up whisking the ball over the crossbar. The decisive goal came in the 47th minute when Yuton’s corner was shot in by Andre Carrillo to put Peru ahead. Peru will face Paraguay in the quarter-finals on Saturday (3).

Edinson Cavani’s penalty won it for Uruguay against Paraguay to finish on second in Group A. Early on, Giorgian De Arrascaeta hit the side-post twice within ten minutes for Uruguay. He was the most threatening player against the Paraguayan defence in the early exchanges and rightfully he earned Uruguay a penalty in the 20th minute. Cavani made no mistake with the shot as Uruguay secured the win and they will face Columbia in the quarter-finals on Sunday (4).

Argentina ended the group stage with a 4-1 win over Bolivia on Tuesday (29 June). Skipper Lionel Messi became the most capped player for Argentina with 148th appearance. They took the lead in the 5th minute when Messi chipped the ball over the defender to Dario Gomez who found the net. In the half-hour mark, Gomez earned a penalty and it was converted by Messi to make it 2-0. Minutes later, Messi scored his brace after Sergio Aguero lobbed it over the back line and Messi chipped it over the incoming keeper.

Bolivia managed to draw one back early in the second half through Erwin Saavedra who found the top corner. At the hour mark, second-half replacement Lautaro Martinez scored the fourth for Argentina. They will go on to face Ecuador on Sunday (4).

February 19, 2021 byRevatha No Comments
Former Sri Lanka fast-bowler Chaminda Vaas is said to be appointed as Fast Bowling Coach in place of Sekar on an ad-hoc basis for the West Indies tour

December 18, 2020 byNethmi Liyanapathirana No Comments
This is the official team song of the Jaffna Stallions franchise which eventually lifted the inaugural LPL trophy on a glorious night on Wednesday (16) at the Mahinda Rajapaksa Stadium in Hambantota.