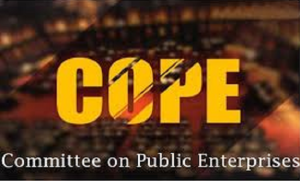 The Committee on Public Enterprises (COPE) will meet tomorrow(3) to discuss the Forensic Audit Reports on the CBSL Treasury bond investigation, the Parliament’s Media office said.

Earlier reports said, COPE had received the copies of the Forensic Audit Reports and will meet to decide on submitting them to Parliament.

The Attorney General has ordered limited access to the reports in order to avoid any possible prejudicial effect on ongoing and future litigation.

Presidential Commission of Inquiry (PCoI) probing into the alleged bond scam had recommended that forensic audits be done.

Accordingly, BDO India and KPMG were tasked with preparing the forensic audits and five of those audits began in April this year.

The Former CBSL Government Arjuna Mahendran, was accused in 2015 of passing sensitive information to his bond-dealer son-in-law Arjun Aloysius, to make millions in undue profits.

Accordingly the loss to the state has been estimated to be over US$11 million.

October 6, 2021 byNews Admin No Comments
An international flight is scheduled to take off from Ratmalana Airport to the Maldives next month, according to the Tourism Ministry, marking the first transnational flight from the airport in fifty