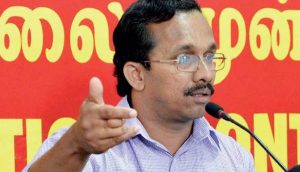 President Maithripala Sirisena speaking at the opening ceremony of the Lotus tower on Monday(16) said in 2012 a Chinese company; Aerospace Long-March International Trade (ALIT) had been paid a sum of Rs. 2 bn by the Rajapakse Government as part of the deal for the lotus tower project.

Sirisena alleged once he became President there was no sign of ALIT nor the Rs. 2 Bn.

However Opposition Leader Rajapaksa in a press statement today denied such allegations.

October 28, 2020 bySarah Hannan No Comments
The tourism sector is awaiting health authorities’ green light to begin welcoming tourists to the country once again.

January 13, 2021 byRusiru Keppetipola No Comments
The Samagi Jana Balawegaya (SJB) is mulling its next steps following the imprisonment of its Parliamentarian Ranjan Ramanayake, which range from seeking a presidential pardon to filling his parliament