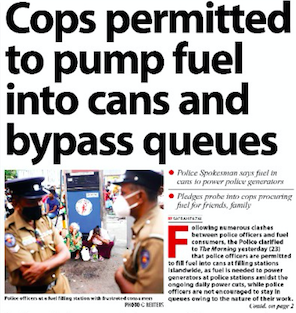 Following numerous clashes between police officers and fuel consumers, the Police clarified to The Morning yesterday (23) that police officers are permitted to fill fuel into cans at filling stations islandwide, as fuel is needed to power generators at police stations amidst the ongoing daily power cuts, while police officers are not encouraged to stay in queues owing to the nature of their work.

Speaking to The Morning yesterday, Police Media Spokesman, Senior Superintendent of Police (SSP) and Attorney-at-law (AAL) Nihal Thalduwa said that police officers can be authorised to pump fuel into cans due to the present energy crisis.

He added that investigations will not be carried out against incidents where police officers have obtained fuel despite not being in queues, emphasising that they are on duty throughout the week, which makes it impractical for the officers to remain in queues for five to six hours and then report to work.

“We don’t encourage police officers to stay in queues. We need officers to respond to 119 calls, other emergencies, and investigations. So, we cannot afford to have our officers in queues,” he added.

He requested those who severely criticise and protest against this to pause and consider if it is fair, as officers are also required to be on duty at night to respond to emergencies and cannot, therefore, remain in queues during the day and report to work in the night.

However, Talduwa said that, if there is clear evidence that proves that police officers have used their influence to secure fuel for friends or family, action will be taken against them.

Videos are being shared on social media showing police officers obtaining fuel for their vehicles and cans, which has outraged many as the public have remained in queues for days on end only to receive a limited amount of fuel. Tense scenes were reported even yesterday (23) at the Gampaha co-operative fuel filling station, when Police officers attempted to fill fuel into cans by bypassing the long queue. Members of the queued up public demanded to see the relevant government authorisation issued to the police officers in question allowing them to fill fuel into cans.

March 1, 2022 byNews Admin No Comments
The Colombo High Court (HC) has rejected the preliminary objections with regard to a bribery case filed against former Chief Minister (CM) of the North Central Province S.M. Ranjith Samarakoon and his

May 16, 2019 byRandev No Comments
It was reported that Speaker Karu Jayasuriya had received a No-Confidence motion against Minister Rishard Bathiudeen today (16).