November 18, 2020 by Dimithri Wijesinghe No Comments

The Ceylon Fishery Harbours Corporation (CFHC), under the guidance of Fisheries Minister Douglas Devananda and State Minister of Ornamental Fish, Inland Fish and Prawn Farming, Fishery Harbour Development, Multi-day Fishing Activities, and Fish Exports Kanchana Wijesekera, carried out a project where old Sri Lanka Transport Board (SLTB) buses have been utilised to create an underwater reef for crustaceans and fish in the Trincomalee sea. 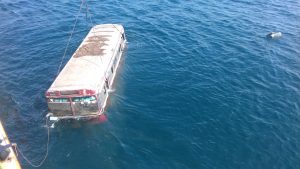 Department of Fisheries and Aquatic Resources Director General Susantha Kahawatte shared that the project was undertaken under the gazette issued for the guidance of new ministries; it was mandated that in coastal areas, in order to promote the breeding of fish habitats, they are to adopt methodologies which introduce scientifically supported practices to assist the growth of fish habitats.

Occupying less than a tenth of 1% of the Earth’s surface, coral reefs are home to more than 25% of all marine species and attract marine habitats including schools of fish, crustaceans, mollusks, and sponges. However, the naturally occurring coral reefs have been far and few in between, with many being damaged due to human activity. Pollution, disease, and overfishing are all hitting coral reefs hard, and many face an uncertain future – mankind might be pushing many of the coral reefs around the world to the point of destruction. However, there have been efforts made to create artificial reefs and also towards reef restoration. 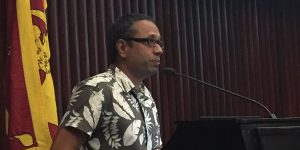 However, speaking to marine biologist and Blue Resources Trust Co-Founder and Director Nishan Perera, he shared that while establishing structures that create marine habitats is in no way a negative thing, it is not in any way a substitute for natural coral reefs.

Referring to the project carried out by the CFHC, he said that while artificial reefs have many benefits, they are not a substitute for natural coral reefs. However, the creation of artificial reefs has been adopted in order to promote fish habitats. He stated that in areas like the East Coast of the US, they have adopted the use of such manmade structures sunken into the ocean in order to create fish habitats for recreational fishing. He shared that while in Sri Lanka it is primarily commercial fishing that is prevalent, this can serve as an effective tourist attraction. 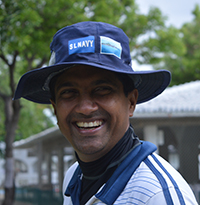 While humans have been responsible for creating new ones, by sinking large structures into the ocean, allowing corals to gradually collect, bringing with it flowering miniature ecosystems, scientists hold strongly on to the fact that there is no substitute to what occurs naturally, and while we mustn’t take away from these efforts of creating aided artificial reefs, they state that more effort should be dedicated to conservation.

Perera too stressed that there must be a concerted effort to conserve natural coral reefs, adding that it is often the mindset of the general public that human solutions can replace what has been created naturally and that this is never the case. “Nothing can match what nature has built for thousands of years,” he said. However, of course, it is not without its benefits. Human efforts in building artificial reefs and also reef restoration should ideally go hand in hand with a more dedicated effort to conserve what nature has given us. 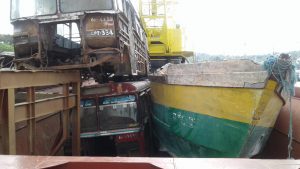 He also shared that when doing things like this, it is best to follow through with a science-based approach and conduct scientific monitoring to fully understand the impacts, and improve programmes for the future.

Speaking to Marine Environment Protection Authority (MEPA) CEO/General Manager Dr. Terney Pradeep Kumara, he too shared that there is no alternative to conservation; these can only further assist. He also added that there must be a methodology followed which is evidenced by scientific backing to ensure that all sound ecological processes are followed through – the depth it is placed at, the distance from other habitats, the distance from the shore, etc.

He also stated that there must be a follow-up carried out in order to learn from the processes adopted, especially considering that metal structures are subject to corrosion, and while shipwrecks last longer as they are built to be in ocean structures such as this, with regard to the use of metal buses, there must be an assessment done in at least two years’ time to see how it is fairing.

January 26, 2020 bythemorninglk No Comments
Premieres in Sri Lanka keep getting better while Hollywood keeps dropping the ball on their blockbusters.

‘End the Doomed Legacy!’ by the Stop Child Cruelty Trust