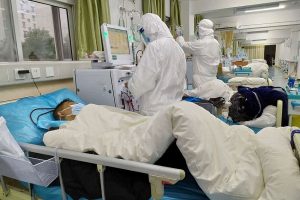 China is struggling to deal with the virus, with more than 17,000 confirmed cases and 361 deaths.

China is set to open a new hospital in the city at the centre of the coronavirus outbreak, as the numbers of people infected continue to grow.

Wuhan’s 1,000-bed Huoshenshan Hospital, built in just eight days, is one of two dedicated facilities being constructed to help tackle the outbreak.

Sunday saw the first confirmed fatality outside China, in the Philippines.

The patient was a 44-year-old Chinese man from Wuhan who appeared to have been infected before arriving in the Philippines.

Many countries have barred foreigners arriving from China and are quarantining their own citizens.

Latest figures from China’s National Health Commission on Monday revealed that, alongside the confirmed cases, there were:

There have been more than 150 confirmed cases of the virus outside China.

Hospitals in the province of Hubei – where Wuhan is located – are reportedly overwhelmed and struggling to treat the growing number of patients.

Meanwhile, hospital workers in Hong Kong are preparing to go on strike from Monday unless the territory’s border with mainland China is completely closed.

The territory’s authorities have refused to do this, citing World Health Organization recommendations to introduce screening at borders rather than closing them.

The number of coronavirus cases worldwide has overtaken that of the similar Sars epidemic, which spread to more than two dozen countries in 2003.

But the mortality rate of the new virus is much lower, suggesting it is not as deadly.

February 15, 2021 byLahiru Pothmulla No Comments
In a letter to Justice Minister Ali Sabry, Saliya Pieris PC has requested to consider that those involved in the administration of justice for the COVID vaccine as early as possible.

June 14, 2021 byMihi Perera No Comments
The AgTech Showcase held on 10th June,2021, virtually is an initiative to increase awareness and adoption of Technology in the Agriculture industry.