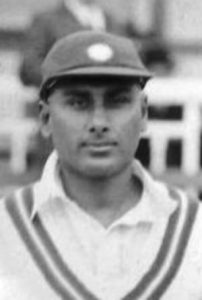 In every aspect of life, this, Ramaswami has remained a singular character. His first name remains unverified; he has been a double-international; he was the second-oldest Indian Test debutant; for a long time he had the second-highest Test average for an Indian; and no one knows when or where he had passed away.

* Ramaswami played in the Davis Cup for India in 1922

* In 1936, he became the second-oldest Indian to make Test debut

* Only Rustomji Jamshedji had debuted for India at an older age

* M.J. Gopalan is the other who represented India in both cricket and hockey

Cotah Ramaswami, born June 16 1896 or exactly 125 years ago, represented India in both cricket and tennis. Here we reproduce the article written by Abhishek Mukherjee* on the life of this special Indian sportsman on 15 June 2016 in The Cricket Country.

The youngest son of Buchi Babu Naidu, the great patriarch of Madras cricket, Cotah Ramaswami was a fine left-handed batsman who had a 27-year first-class cricket career. In 53 first-class matches, he had scored 2,400 runs at 28.91, a decent number given his era, with two hundreds, and had picked up 30 wickets at 33.06.

Tall and sturdily built, Ramaswami played some excellent strokes off the front foot on both sides of the wicket. He was a treat to watch when in his elements.

There is a reason for Ramaswami’s first name not appearing anywhere in this article. The most commonly used version of his first name is Cota, though Ramaswami himself has used the name Cotah (which is possibly a variation of Cota) in his autobiography ‘My Reminiscences’. To make things more complicated, the spelling Cotar appears on the list of 1932 Calendar published by the University of Cambridge. The chroniclers of the sport are yet to agree on this.

Ramaswami made his first-class debut in 1915-16 against the Europeans. Playing for Indians, he batted decently, scoring 21 and 31, and picked up 2/24 with the ball in the first innings. In the same fixture the next season, he scored 92 and 44, and picked up 6/126 in the match.

The Madras cricket fraternity was impressed, but Ramaswami’s first-class matches were restricted to one a year, which meant that he played only four matches before he left for Cambridge in 1919.

Ramaswami studied in Cambridge till 1923. After representing Cambridge University in men’s doubles and winning matches on a Netherlands tour, he was selected for the Davis Cup team. India thrashed Romania in the first tie at Beckenham by a 5-0 margin. Ramaswami played only in the doubles (partnering Dr. Hassan-Ali Fyzee) and won the match 6-2, 6-4, 6-0 against Nicolae Misu and Misu Stern.

After being eliminated, Ramaswami played in the doubles in India’s next Davis Cup against Spain. Though India lost the tie 1-4 and were eliminated, Ramaswami and Dr. Fyzee defeated the formidable pair of Eduardo Flaquer and Manuel de Gomar by a 3-6, 7-5, 11-9, 8-10, 6-4 margin in a marathon contest.

Ramaswami came back to India after he completed his studies at Cambridge, taking up a job as an officer in the Agricultural Department. He continued to play cricket at various levels for Madras, and was a part of the first Ranji Trophy match against Mysore, scoring 26. Followed this performance with a match-winning fourth-innings 35 not out against Hyderabad, he was selected to play for Madras against Jack Ryder’s touring Australians at Chepauk.

Coming out to bat at 62/3, Ramaswami scored an unbeaten 48, out of a total of 142. After Gopalan skittled out the Australians for 42, Ramaswami once again lifted his side — this time from 25/5 to 165, scoring 82. The effort went in vain, though, as the tourists chased down the target of 262 thanks to an unbeaten last-wicket partnership worth 77 runs.

The match was good enough to earn him a place on the 1936 tour of England. In his other book ‘Ramblings of a Games Addict’, though, he has expressed the opinion that he was selected for “reasons other than cricket”, given that he had become “bulky and slow” at forty.

Ramaswami had an innocuous start to the tour, but found his groove in the second half of the summer, scoring 127 not out (his maiden first-class hundred, which would also remain his career-best knock) and 78 in consecutive innings, both against Lancashire.

With India having lost the Lord’s Test, Ramaswami made his debut in the second Test at Old Trafford, possibly because of his earlier success at the ground. At 40 years 39 days, he became the second-oldest Indian to make his Test debut behind only Rustomji Jamshedji who had made his debut at an age of 41 years 27 days.

On debut, Ramaswami came out to bat at 100/4 against a strong England outfit, and scored 40 out of a 61-run partnership with Wazir Ali before being clean bowled by Hedley Verity. After England took a massive 368-run lead, Vijay Merchant and Mushtaq Ali famously put up 203 for the first wicket before Ramaswami joined Merchant.

There was still work to be done. Though India lost Merchant, Ramaswami batted on, eventually scoring a 120-minute 60 before being bowled by Walter Robins, and by the time he was out, India had managed to save the Test.

Due to Vizzy’s (Lt. Col. Pusapati Vijay Ananda Gajapathi Raju who led India in the Test) eccentric batting line-up changes, Ramaswami was dropped to five in the last Test at The Oval. He scored 29 before Jim Sims bowled him, and he found himself batting at eight as India attempted to save an innings defeat after trailing by 249. Coming out at 222/6 with only the bowlers and, of course, Vizzy to follow, there was some grafting to be done.

What followed next was a delightful, counterattacking partnership between C.K. (Cottari Kanakaiya) Nayudu and Ramaswami. The innings-defeat was soon avoided, and both batsmen blossomed, driving the English bowlers like champions. Even after the Indian Captain departed following a 73-run partnership, Ramaswami continued to bat on — and remained unbeaten on 41 as India collapsed to 312, losing by nine wickets.

This turned out to be Ramaswami’s last Test: he finished with 170 runs at an average of 56.67, and his average is the fourth-highest among Indian batsmen. 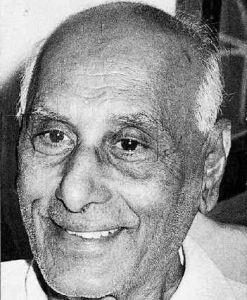 Ramaswami continued to play for both Madras and Hindus till 1941-42 while acting as a mentor to the younger crop. His presence in the dressing-room till the age of 46 had a positive impact on the teams he played for.

His last great innings came in 1939-40 when he played for the Indians against the Europeans. He came out to bat at 57/3, and once again Nayudu and Ramaswami took the attack to the opposition camp, adding 68 in no time. Ramaswami batted on, eventually scoring 105 with nine fours and two sixes — a measure of what could have been.

After he quit first-class cricket, Ramaswami remained a significant and respected name in the Madras cricket circuit. He was appointed the Manager of the first Indian team to the West Indies in 1952-53, and became a national selector later that decade; the committee he was a part of ended up selecting (rather notoriously) four Captains in five Tests for the home series of 1958-59 against West Indies.

On the morning of 15 October, 1985 (aged 89 years and almost four further months) Ramaswami left his residence at Adyar, never to return. There have been subsequent occasional sightings of him, but none of them had been confirmed. He was listed as ‘presumed dead’ in Wisden. Nobody has seen him since, but record books everywhere have updated his date of death with January 1990 (then his being 93).

In every aspect of life, this, Ramaswami has remained a singular character. His first name remains unverified; he has been a double-international; he was the second-oldest Indian Test debutant; for a long time he had the second-highest Test average for an Indian; and no one knows when or where he had passed away.

August 3, 2020 byTSM Web Desk No Comments
The resignation of former Sri Lanka Cricket (SLC) Vice President Kangadaran Mathivanan with exactly a week to go for the parliamentary election in Sri Lanka created quite the shock.