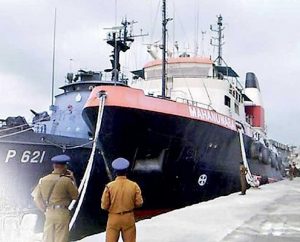 The amended indictments filed by Attorney General(AG) on the Avant-Garde floating armory case has been rejected by the Colombo High Court Trial-at Bar.

On the 30th of January, AG Dappula de Livera had filed amended indictments over the Avant Garde Arms Trafficking case.

882 charges were filed before Trial-at-Bar at the Colombo High Court(HC) against 8 defendants including Chairman of the Avant-Garde Maritime Services Company Nissanka Yapa Senadhipathi on the Avant-Garde floating armory case.

However, when the case was taken up today, the Defense Counsel pointed out that the amended indictments filed by the Attorney General were completely contrary to law.

Subsequently, the trial-at-bar made a ruling to reject the amended indictments.

In October last year, the AG filed 7,573 charges against the 8 accused in the case. However, the court had rejected all charges except for 19 charges and had requested the AG to file amended charges.

The bench today (20) decided to hold hearings on 19 other charges against the defendants on the 4th of May.

January 19, 2021 byRusiru Keppetipola No Comments
Indictments were yesterday (18) handed over to MP and former Fisheries Minister Dr. Rajitha Senaratne and two other respondents who were previously charged with causing a loss to the State by leasing.

Omicron: Can it be a game changer?

December 8, 2021 byNews Admin No Comments
Following the advice of its Technical Advisory Group on Virus Evolution (TAG-VE), the World Health Organisation (WHO) on 26 November designated the variant B.1.1.529 as a variant of concern and named