Covid-19 and the burden of child undernutrition in Sri Lanka

The nutritional status of children under five in Sri Lanka has not shown a significant improvement for the last 20 years, according to the Demographic and Health Surveys (DHSs) of the Department of Census and Statistics (DCS). It has also been lagging behind most of the other health and social indicators on children. While there was a remarkable improvement between 1993 and 2000, the progress from 2000 to 2006/07 has been slower. The percentage of underweight children under five years declined from 34% in 1993 to 23% in 2000 and thereafter to 21% in 2006/07. As per the latest available data from 2016, the figure declined only marginally from 21% in 2006/07 to just 20.5% in 2016. The percentage of stunted children has remained unchanged at 17.3, during the period from 2006/07 to 2016.  This clearly shows that the interventions to improve child nutrition have not shown the desired results.

Recent research by the IPS shows that household income, inadequate nutrient intake, breastfeeding practices, mothers’ education, etc. play a major role in child undernutrition in Sri Lanka. Moreover, given significant losses in household income experienced at the hands of the Covid-19 pandemic, nutrient intake may have declined further over the past year. As such, it would be a challenging task for health planners to develop effective strategies to minimise undernutrition among children under five years. This article highlights some of the facts contributing to child undernutrition in Sri Lanka, and suggests ways to address this critical issue. 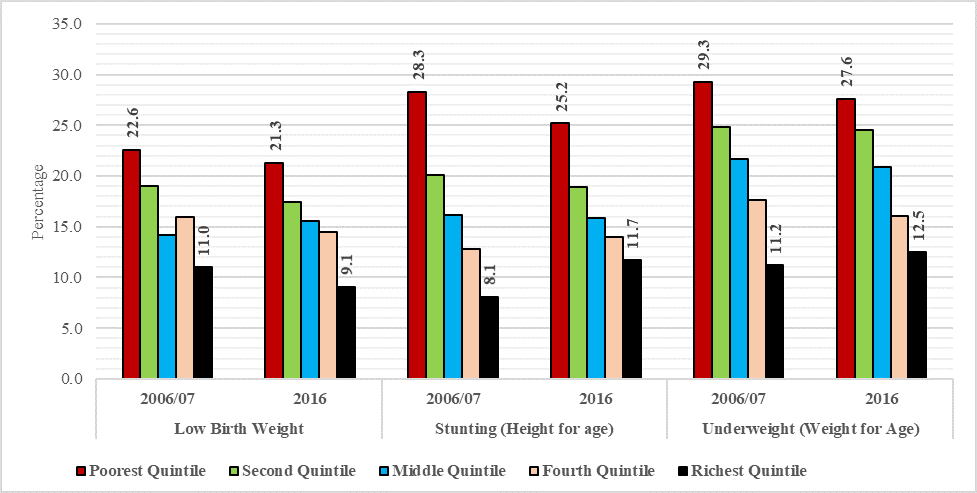 Figure 1: Incidence of undernutrition of children under five years by wealth quintile Source: Based on Demographic and Health Surveys – 2006/07 and 2016, DCS

As the poor and vulnerable families are affected disproportionately due to the effects of Covid-19, there is a strong possibility for child undernutrition to deteriorate further, as the incidence of undernutrition is already high for children of poorer families. For example, the percentage of underweight children is 29.3 in the poorest wealth quintile in 2006/07, compared to 11.2 in the richest quintile, without a significant improvement even in 2016 as per DHS 2016. A similar pattern can be observed in the case of stunted children (Figure 1).

Overall, 82% of all children under the age of six months are exclusively breastfed, but this drops to just 2.2% thereafter. During exclusive breastfeeding, the incidence of being underweight is below 15% but increases thereafter when the children are introduced to supplementary foods. Thus, the higher incidence of undernutrition among poorer children after exclusive breastfeeding is due to inadequacy in nutritious food intake. For example, only 56.5% of the children (6-24 months) in the lowest wealth quintile receive at least four nutritious food items, while the corresponding figure for children in the highest wealth quintile is 85.7% (DHS-2016). Data from the Household Income and Expenditure Survey 2016, also show that a significant proportion of poorer households with children under five years, do not receive the minimum requirement of energy (Table 1).

Out of the children under five years, in the poorest quintile, almost 85% are from households not meeting the minimum energy requirement. This percentage declines with increasing household income levels. Although it is not possible to directly link the inadequacy of nutrients of children living in poorer households to the poor nutritional status of children, the results of these two independent surveys conducted in the same year suggest that there is a strong possibility.

A mother’s education plays a significant role in the nutritional status of children under five years (Figure 2). The incidence of undernutrition declines as the mother’s education level rises. For example, the incidence is highest for children of mothers with no education (29.3% in 2006/07 and 27.6% in 2016), which drops to around 11-12% for children of mothers with education of GCE (Advanced Level [A/L]) or higher. As almost 20% of mothers in the poorest per capita expenditure quintile have not completed even grade 8 (HIES – 2016), they may not have the knowledge or means to provide the required nutrients to their children. The nutrition status of poor children may have deteriorated further due to inadequate access to food during the pandemic. A UNICEF survey conducted in May 2020 in Sri Lanka has shown that 30% of the families surveyed have reduced their food consumption.

Figure 2: Incidence of stunting in and underweight children under five years and low birth weight by mother’s level of education – 2006/07 and 2016 Source: Based on Demographic and Health Surveys – 2006/07 and 2016, DCS

The policies implemented to reduce undernutrition in children thus far need to be reviewed, as there is hardly any improvement, and the situation is likely to worsen due to the ongoing pandemic. In this regard, urgent and targeted policy interventions are vital to address the negative consequences. The priority should be children of poor families disproportionately affected by Covid-19. They need to be identified and included in the social safety nets and nutrition support systems. Mothers who lack formal education need to be given special guidance on food and nutrition during pregnancy and lactating periods, and especially when the children are introduced to supplementary foods. Here, the national food fortification programme, “Fill the Nutrient Gap” which commenced in 2017 to address undernutrition issues in Sri Lanka, needs to be precisely targeted to cover vulnerable children, adolescent girls, and pregnant and lactating women. Providing nutritional education on low-cost nutritious food items, and proper feeding practices are necessary policy interventions to cope with the problem of child undernutrition in Sri Lanka during this crisis.

(The writer is a Senior Visiting Fellow at the IPS with research interests in poverty, and is a specialist in sampling. He was previously engaged at the DCS, where he functioned as the Director General for 12 years. He received his BSc in Mathematics and Physics from the University of Peradeniya and holds a Postgraduate Diploma in Applied Statistics from the University of Reading, UK. He can be contacted via wimal@ips.lk)

January 11, 2021 byRusiru Keppetipola No Comments
By the end of the first week of the new year, the Colombo Stock Exchange (CSE) had recorded a net foreign outflow (NFO) of Rs. 964.65 million, with Rs. 1.52 billion worth foreign sales being reported.