Note: Three players from England series’ original squad; Dhanushka Gunathilaka, Kusal Mendis, and Niroshan Dickwella, are not considered for the India series as they are currently suspended for disciplinary breach 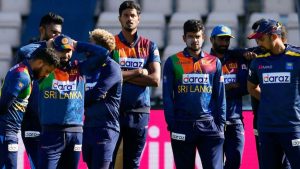 Amid the usually bitter pandemic realities, organisers hope the India white-ball series can go ahead uninterrupted from Tuesday (13)

Friday, 9 July 2021: Sri Lanka team was in quarantine as we filed this report on Friday (9) and was to complete the mandatory quarantine only tomorrow (12), Monday, a day before the start of the series.

The positive Covid-19 report on Thursday (8) of Sri Lanka Batting Coach Grant Flower and another positive report on Friday (9) of the team’s Computer Analyst G.T. Niroshan made things worse and more complicated for the Sri Lanka team management.

According to Prof. Arjuna de Silva who overlooks the SLC medical team said on Derana on Friday TV that Flower refused to be vaccinated for Covid-19 since what was given to the team was not the one (Pfizer) that he preferred.

A reality during the pandemic

By Friday afternoon, the health authorities in Sri Lanka had already quarantined the players who had returned from England on Tuesday (6). As per the protocols, they will have to complete mandatory seven days of quarantine (from 6 to 12 July) before they are allowed to participate in any outdoor net sessions.

“We can’t help the situation. These are the kind of times we are living in. Team will have to follow all health protocols as directed by the authorities. Yes, it is correct that the players who will be selected from the squad who were in England, are unlikely to get net session before the first game against India (on Tuesday),” Chairman of National Selectors Pramodya Wickramasinghe had been quoted as saying by the Inside Sports in India on Friday.

“The good part is that none of them have tested positive in the first round of PCR tests,” he had added.

SLC had prepared a back-up squad consisting of about 13 players in a separate Colombo hotel (Cinnamon Grand) before the “full team” returned from England. SLC gave the back-up squad their tour contracts and by Friday had made up a 25-player squad for India, mixing 19 players from England and six from Cinnamon Grand.

It is worth noting that the entire squad, after their arrival from England on Tuesday (6), was tested for Covid-19. All the players had tested negative but for Flower. At this stage the entire squad had been quarantined for seven days in another hotel in Colombo (not Cinnamon Grand).

On Monday (5), three England players and four members of their management staff returned positive results from a round of PCR tests in Bristol.

This prompted the entire England ODI squad to self-isolate for two days before the start of their series against Pakistan. The remaining squad members, other than the seven who tested positive, had been deemed close contacts.

Anyway, the Pakistan ODI series began as planned on Thursday (8) with Ben Stokes captaining England in place Eoin Morgan. Nine uncapped players were called for England national duty. Several players were to be pulled out of the ongoing County Championship to join up with the national squad.

Yet England still beat Pakistan comprehensively by nine wickets in the first of a three-match ODI series in Cardiff on Thursday after bowling out the visitors for 141 runs, with one of their “replacement players” Saqib Mahmood becoming the Man of the Match for his 4/42.

As per the routine, there is 14-day quarantine in Sri Lanka upon anyone arriving in the country. It was reduced to seven days as Sri Lanka team was in a similar bio-bubble in England before they arrived here.

During their first three days here (Tuesday, Wednesday, and Thursday last week) of quarantine, the players were to be inside their hotel rooms. In the next four days (from Friday to Monday), they were to be allowed to use hotel gym and swimming pool.

They were to participate in any kind of outdoor activity only after completion of the seven-day quarantine period on Monday (12). Yet the first ODI is scheduled for Tuesday (13).

Series can go ahead anyway

What this means is that Sri Lanka will have to straightaway play the first match against Dhawan’s India white-ball team without a single net session. Their last ODI in Bristol too was washed off on 4 July after Sri Lanka were bowled out for 166. They lost the T20I series 3-0 and went down 2-0 in the ODIs.

“They can only train in the hotel as it has facilities, which can be of some help. Outdoor activity would only be possible after completion of quarantine,” Sri Lanka Cricket (SLC) Secretary Mohan de Silva has told Inside the Sport.

Will the Indo series be cancelled if any player is going to be positive in the coming days?

Prof. de Silva assured on Friday that the series can go ahead anyway. “There is another bio-bubble operating in Dambulla where Sri Lanka’s second-string teams are currently undergoing residential training. If a necessity arises, we can get down players from that bubble.”

October 14, 2019 byRevatha No Comments
Shanaka Amarasinghe reports exclusively to The Morning from Japan on RWC 2019

January 16, 2021 byRevatha No Comments
Suffers a fracture in his left hand and is advised to have further rest