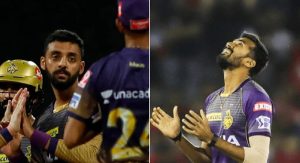 Yesterday (3) night’s Indian Premier League (IPL) match number-30 between the Kolkata Knight Riders (KKR) and Royal Challengers Bangalore (RCB) was postponed by the organisers the Board of Control for Cricket in India (BCCI) around noon yesterday.

It was understood that two players of the KKR contingent, their mystery spinner Varun Chakravarthy and fast bowler Sandeep Warrier, have tested positive for Covid-19.

Barring Chakravarthy and Warrier, the rest of the KKR contingent’s tests had come out clear, news emerging from India said last evening.

This is the first instance of positive Covid-19 cases being reported within the IPL bio-bubble since the 2021 season started on 9 April.

It is understood that the others in the group, which is currently in Delhi, have cleared their tests, which had been conducted on Sunday (3).

Tomorrow’s game to go ahead

Viswanathan, Balaji and the member of the maintenance staff had reportedly taken a fresh test yesterday morning to rule out the possibility of a false positive.

If they test positive again, they will need to spend ten days in a designated isolation facility outside the team bubble and return two negative tests before being allowed to re-enter.

Balaji, the former India fast bowler, was in the team’s dugout on Saturday (1), when the CSK lost off the last ball to the Mumbai Indians.

As things stand, though, their next match, against the Rajasthan Royals in Delhi tomorrow (5), is set to go ahead.

ECB concerned on their IPL players 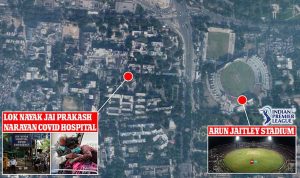 IPL is being played at a stadium directly opposite Delhi’s main Covid hospital, the LNJP, which is struggling to cope the surging number of patients coming in daily

An England and Wales Cricket Board (ECB) spokesperson has said yesterday that they are monitoring the situation at the IPL but the decision to continue to play or leave would be left to the players.

“We continue to monitor and communicate with our players and staff currently in India,” the ECB spokesperson had been quoted as saying in the Indian media yesterday.

“In terms of continued participation, it will be a decision that will be taken by each individual,” he had added.

Among the 11 England players who are currently at the IPL, three belong to the two affected franchises – Moeen Ali and Sam Curran are with the CSK and Eoin Morgan is with KKR.

This is the second time the Super Kings have had to deal with a Covid-19 outbreak in the team bubble.

At IPL 2020 too, which was played in the UAE, Kasi Viswanathan’s wife had been one of several members, including players Deepak Chahar and Ruturaj Gaikwad, who tested positive ahead of the tournament.

The number of coronavirus cases in India has risen exponentially in recent weeks to almost 400,000 new cases per day as of Sunday (2) and almost 20 million confirmed cases overall. The death toll in India too has risen sharply since February, with the country’s morgues and crematoriums struggling to cope.

Meanwhile the Australian contingent playing in the tournament were threatened with imprisonment if they attempt to return home in the next fortnight.

Stars such as David Warner, Pat Cummins, and Glenn Maxwell are among more than 30 Australians playing in the lucrative T20 tournament. They can’t return home under their Government’s new legislation to ban anyone from India entering Australia.

The Australian Govt. passed an emergency bill on Saturday that shuts its borders to its own citizens if they have been in India in the preceding 14 days.

Those attempting to return to Australia face sever fines and/or a five-year prison sentence.

November 28, 2018 byRevatha No Comments
Yasir Shah finished with the second-best figures by a Pakistan bowler in Test history.

August 20, 2018 byMalik No Comments
Four Japanese basketball players have been sent home from the Asian Games for allegedly paying women for sex.