In Sri Lanka, the disposal of the bodies of Covid-19 victims has become a topic that roused elements of racism and ridicule against a single minority community – the Muslims.

When deaths related to Covid-19-positive persons began to be reported in the country, the Government and health authorities imposed an iron-fisted regulation to cremate all bodies of those who died or were suspected to have died due to Covid-19, resulting in the the Muslims community of Sri Lanka fighting to win their fundamental right to follow their religious practice of burying their dead.

The numerous letters and petitions filed at the Supreme Court, and the requests made to the country representative of the United Nations (UN) to urge the President and Prime Minister of the country to consider the matter are yet to show a positive outcome. 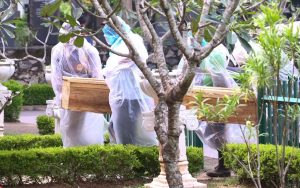 The question is why only Muslims, and what about Christians and Buddhists who do not want their dead cremated?

At the beginning of November, there was a glimpse of hope when the Cabinet of Ministers took the matter for discussion. Minister of Justice Ali Sabry had raised the concern, stating that about 95% of the inquiries he received were requests to consider the possibility of allowing the burial of bodies of Covid-19 victims.

While no decision was reached at the time, the Cabinet had instructed the Ministry of Health to appoint a committee to conduct a study on the pros and cons of burying infected bodies.

“Until the committee returns their findings, we are also looking at the land areas that would have a lower groundwater level table to consider allowing the burial of bodies of Covid-19 victims. Remote islands in the northern part of the country are to be considered and we’ll have to seek expert advice on the feasibility,” Cabinet Spokesperson Minister Keheliya Rambukwella noted.

Meanwhile, the committee that was appointed to conduct the feasibility study on the possibility of allowing the burial of persons who died due to Covid-19 is still deliberating the matter, it is learnt.

Speaking to The Sunday Morning, Minister of Justice Sabry said: “We have asked Minister of Health Pavithra Wanniarachchi to follow up on the matter. The committee is said to be deliberating on the matter and has required sufficient time to do so. We await the response from the committee and the report on their findings and recommendations. An exact date cannot be said as to when we could expect the said report.”

University of Sri Jayewardenepura Ecosphere Resilience Research Centre Founder/Director Prof. Meththika Vithanage, in an article published in Sri Lankan Scientist on 7 April 2020, stated that cemeteries are among the chief anthropogenic sources of pollution and contamination of groundwater in urban areas.

She pointed out that during the process of decomposing, a human corpse produces 400-600 ml of leachate per kilogramme of body weight that might contain pathogenic bacteria and viruses that may contaminate groundwater.

Based on that theory, she drew the conclusion that burials can cause soil contamination and then lead to groundwater pollution.

“In the case of viruses, recent studies indicate that viruses may be transported in soil with rainfall infiltration and extends specifically to drinking water from an untreated groundwater source. Several scientific publications report virus occurrence rates of about 30%,” Prof. Vithanage noted.

Further pointing out the lack of understanding about the behaviour of the Covid-19 virus, she said there can be a risk from dead bodies, septic waste, or sanitary waste. Hence, it is advisable to have careful measures in destroying the infected dead bodies, septic, and sanitary waste in proper conditions without provisioning chances for any future disease outbreak.

In April 2020, the Muslim Council of Sri Lanka (MCSL) wrote to President Gotabaya Rajapaksa to turn his attention to the total disregard of religious funeral rites of minorities by the health authorities in cremating Muslims who died of Covid-19.

Over 182 countries including India, Singapore, the UK, Australia, Malaysia, Iran, Israel, the US, and Italy have permitted to bury or cremate dead bodies of those infected with Covid-19, as per the specified guidelines, respecting the beliefs of the deceased and their families.

The Government Medical Officers’ Association (GMOA), in a letter to the President dated 3 April 2020, requested for a panel of experts to discuss the matter which has serious consequences on the final rites of religious minorities.

The GMOA noted that while very little is known about the Covid-19 pandemic, the WHO, after expert opinion of world-renowned researchers and specialists, has very clearly specified that those infected with the virus could be buried.

An entry in the Journal of the Royal Society of Medicine Volume 91, dated March 1998, titled “Death and Dying – A Muslim Perspective” and authored by Aziz Sheikh MRCP MRCGP, points out how it is the doctor’s role to enable an individual to die with dignity and to honour their beliefs.

Sheikh notes: “For a Muslim, death marks the transition from one state of existence to the next. Islam teaches that life on Earth is an examination – the life to come is the eternal abode where one will reap the fruit of one’s endeavours on Earth. Death is, therefore, not to be resisted or fought against, but rather something to be accepted as part of the overall divine plan.”

When a Muslim dies, the eyes and mouth should be closed and the limbs should be straightened. The body should ideally face in the direction of Mecca. It is a religious requirement that the dead be buried as soon as possible and considerable family distress can be avoided by the speedy production of the death certificate.

The body will be washed and shrouded in simple unsown pieces of white cloth. A funeral prayer is held in the local mosque, and family and community members follow the funeral procession to the graveyard where a final prayer is said as the deceased is laid to rest. Events occur in rapid succession and often the dead will be buried within 24 hours. A Muslim is always buried rather than cremated.

The Islamic belief holds that it may be possible for the deceased to perceive pain. This is based on the statement of Prophet Muhammad (Hadith) that “to break the bone of a dead person is like breaking the bone of a living person”, and this is another reason behind not opting to cremate.

The World Health Organisation (WHO), in their tools issued on “Leadership During a Pandemic: What Your Municipality Can Do”, indicated that one must anticipate catastrophic levels of death in the municipality, region, and country. When dealing with the dead, a municipal leader’s main role will be to co-ordinate with other agencies that will carry out the actual retrieval, identification, storage, and disposal of dead bodies. Municipal leaders must also manage public information and messages, and should establish partnerships with key agencies such as the Police, the Army, or civil protection agency in advance, before the situation becomes critical.

The dead and their bereaved should be respected at all times. Cultural and religious needs should be observed, and normal procedures for mourning and burial be allowed to the extent possible during a pandemic.

Consider the use of local crisis intervention teams or psychosocial support teams and whether they can be adapted to the needs and culture of the community. Consider also the context of the pandemic and its effect on local coping mechanisms, it says.

The tool also indicates that burial sites need to be chosen after considering the soil conditions, water table level, and space. Burial sites should be at least 200 m away from water sources such as streams, lakes, springs, waterfalls, beaches, and shorelines.

Is the body infectious?

Based on what we know now, it is believed there is little risk of getting Covid-19 from a dead body. The virus is thought to spread mainly:

Is a team required for the burial?

A team is not required. However, an individual can request support from trained religious leaders and government staff.

Can the family prepare the body for the burial?

Yes. The family can prepare the body. The family would need gloves, a gown, water, and soap or diluted chlorine solution. For washing the body, a waterproof gown, mask or N95 respirator, and goggles or a face shield are recommended to protect from splashing any body fluids.

How do you handle the belongings of the deceased?

Personal belongings of the dead person can be washed with soap and water or disinfectant and then air dried in direct sunlight. Gloves should be used to handle the belongings.

Can the family select the burial site?

Yes. The family can select and transport the body to the final resting place. No special transport is required.

Can the family have a viewing of the body?

Yes. Family members can view the body but must stand at least one metre away from other persons viewing the body. They should not touch the body without taking precautions.

Microfinance: Macro burden on the vulnerable

July 26, 2020 bySarah Hannan No Comments
Over the last decade, the Northern Province has taken shape as a result of much development. On our visit, we noticed there were visibly more townships and also resettlement that had taken place.