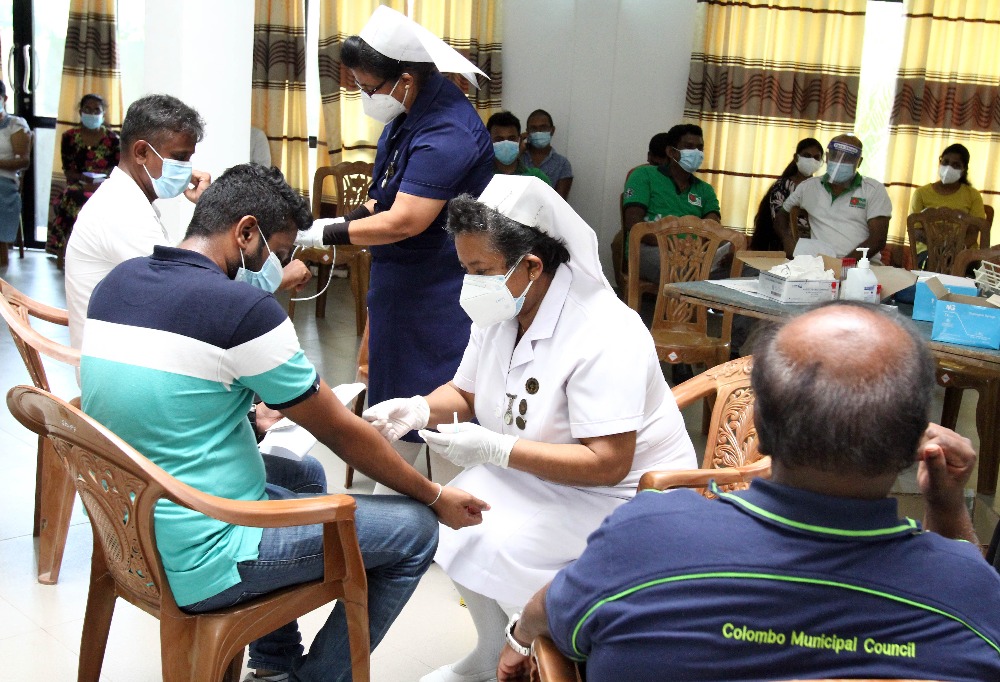 Covid-19 vaccination programme: Vaccine mix and match on the cards

With the country witnessing its worst Covid-19 wave so far and the necessary Oxford-AstraZeneca shipment to administer the second dose of the Covishield vaccine to over 850,000 people unlikely to arrive in time, authorities are now looking into the viability of mixing and matching available vaccine types to meet the demand.

The stocks of Oxford-AstraZeneca currently available to the authorities will only meet the needs of around 350,000 people, which, as Ministry of Health Chief Epidemiologist Dr. Sudath Samaraweera stated, will be administered according to the previous priority list where healthcare workers and frontline workers will be covered first.

However, over 600,000 people remain in limbo over being administered their second dose in time, as India’s ongoing Covid-19 crisis has left the Sri Lankan Government’s initial vaccination timeline in tatters.

The total number of daily Covid-19 cases reported in the country exceeded the 1,000 mark last week for the first time ever.

While State Minister of Production, Supply, and Regulation of Pharmaceuticals Prof. Channa Jayasumana insisted that the country will receive the vaccines from India, Dr. Samaraweera was of the view that it was unlikely the vaccines would arrive anytime soon.

He told The Sunday Morning that research was currently being conducted to see if a mechanism of mixing and matching vaccines could be implemented in a situation where the second dose from the first administered vaccine type was not available.

“They have purchased vaccines from the Covax facility and started a mechanism to distribute it to other countries. But at present, they are also unable to receive vaccines required for India due to the current surge of cases in the country,” he stressed, adding that the Sri Lankan Government cannot keep hopes of receiving the AstraZeneca vaccine from India in the near future.

Many other countries including the UK have now started researching vaccine combinations, as concerns grow of a global vaccine shortage.

“If ongoing research proves the viability of any mix and match of vaccines and if the country is able to purchase such a matching vaccine, that could be given as a second dose,” Dr. Samaraweera said.

The shortage of the AstraZeneca vaccine has been reported from many parts of the world and last week, the US had announced that it will share up to 60 million doses of its AstraZeneca vaccine with other countries, as they become available. The doses will only be exported in the coming months after a federal safety review.

Meanwhile, the European Union (EU) has launched legal action against the coronavirus vaccine manufacturer AstraZeneca. Foreign media reported that the European Commission – the EU’s executive branch – has said that it was suing the company for not respecting its vaccine supply contract and for not having a “reliable” plan to ensure timely deliveries.

The Serum Institute of India (SII) said in January that it was planning to ramp up the production of the Covishield vaccine and the US-developed Novavax (not yet licensed for use in India) to 100 million doses a month by March. But these plans have been pushed back to June.

Last year, the SII agreed to supply an initial 200 million doses to the Covax facility – the World Health Organisation (WHO)-backed vaccine-sharing programme to ensure the availability to low and middle-income countries – and 100 million each of the AstraZeneca and Novavax vaccines. The institute was expected to deliver the first 100 million doses between February and May, but Indian Government data shows that it has so far delivered only 30 million.

In such a backdrop, contradictory statements are being made by health officials regarding receiving the required stocks from India.

Vaccines expected in the future

When commencing the second dose, the State Ministry of Production, Supply, and Regulation of Pharmaceuticals stated that India has informed Sri Lanka that this quantity will be supplied in the future and that the country can administer the second dose without any barriers.

According to State Pharmaceuticals Corporation (SPC) Chairman Dr. Prasanna Gunasena, Sri Lanka had already held discussions with companies such as Serum, Sputnik, Pfizer, Sinopharm, and Johnson & Johnson to secure varieties of vaccines within the country.

According to him, 200,000 Sputnik V vaccines will be dispatched to Sri Lanka from Russia by the end of this month, another 400,000 in May, 800,000 in June, and 1.2 million in July. The country is also to receive a total of 35,000 doses of Pfizer between April and June, while another shipment of 105,000 is expected between June and September. Another 4.5 million doses of Pfizer would be delivered between October and December with financial assistance from the World Bank.

“Other vaccines would be purchased from the financial assistance from Asian Development Bank (ADB) and state funds,” Dr. Gunasena said, adding that in addition to the vaccines ordered by the Government, the WHO would dispatch vaccines for one-third of the country’s population and therefore, the country would be able to vaccinate around 40% of its population by September this year.

He also noted that the Sputnik V and AstraZeneca vaccines have already been registered in Sri Lanka and that the National Medicines Regulatory Authority (NMRA) is currently conducting research on the Chinese vaccine Sinopharm.

“Sinopharm would receive WHO approval in the near future and once it is approved, there won’t be an issue of registering the vaccine for local usage. The NMRA has given approval to import the vaccine for emergency purposes, but it has not yet approved it for local usage. Likewise, the Pfizer vaccine would also be received in Sri Lanka and there wouldn’t be an issue of registering the vaccine in Sri Lanka, as it has already received WHO approval,” Dr. Gunasena added.

Speaking with regard to the Sputnik V vaccine, SPC General Manager K.M.D.R. Dassanayake said a pilot stock of 15,000 doses of the Sputnik V vaccine will be received on 4 May and the remaining stocks will be sent after Sri Lanka provides feedback on the vaccine at the end of the trials.

Meanwhile, President Gotabaya Rajapaksa last week emphasised that only vaccination can end the Covid-19 pandemic. He also said the Government has a systematic and strong programme in place to vaccinate the public.

According to the Epidemiology Unit, the AstraZeneca vaccine has been administered to 924,758 people and the China-manufactured Sinopharm vaccine has been given to 2,469 Chinese nationals in Sri Lanka.

Meanwhile, 67,927 doses of the AstraZeneca vaccine have been given to health sector personnel. The number of vaccines given to non-health frontline staff working to control the Covid-19 pandemic is 128,700. Among the others, 43,329 vaccines have been given to people working in high-risk areas. The vaccine has also been given to 3,309 people suffering from chronic kidney disease. As per Health Ministry statistics, the first dose of AstraZeneca has been given to 230,832 people over the age of 60 and 35,663 people between the ages of 30 and 60 in the community.

As per the recommendations given by the WHO, the administration of the second dose of the anti-Covid-19 vaccine should be commenced before 29 April, 12 weeks from 29 January.

Meanwhile, allegations have been levelled against the Government of the mismanagement of vaccines already received, by haphazardly vaccinating without keeping necessary stocks for the second dose.

Sri Lanka Association of Government Medical Laboratory Technologists (SLAGMLT) President Ravi Kumudesh alleged that those who received the first dose are facing a serious problem with the shortage of vaccines for the second dose.

He told The Sunday Morning that they had insisted to the Health Ministry and the President continuously that necessary stocks for the second dose must be maintained while administering the first dose, as there was no conclusive research on mixing Covid-19 vaccines.

“The Health Ministry, without having a proper plan, continued the vaccination programme until the stocks came down to a level of 250,000 doses. At present, there should be at least 1,200,000 doses available within the country to commence the second dose,” Kumudesh stated.

September 15, 2021 byNews Admin No Comments
In the past few months, the Sri Lankan Government intensified its pressure against associations who are contributing to defend the rights of people against a series of serious attacks by the Governmen

August 16, 2021 byNews Admin No Comments
The need for strong legal agreements within a new legal framework for the plantation sector, in order to strengthen the enforcement of the demolition of old line rooms and houses in the plantation sec