CPA, CMEV concerned over anomalies in Gota’s affidavit, renunciation of US citizenship 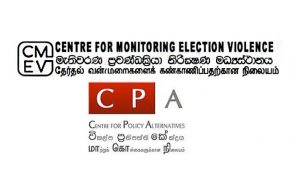 The Centre for Policy Alternatives (CPA) and the Centre for Monitoring Election Violence (CMEV) today expressed concerns over anomalies with Gotabaya Rajapaksa’s affidavit submitted to the Election Commission and whether Rajapaksa continues to be a citizen of the USA.

CPA and the CMEV in a statement today said, they were deeply concerned with recent developments that may impact the Presidential Election due on 16th November.

“These stem from recent media reports that highlight to several anomalies with the affidavit submitted by Gotabaya Rajapaksa, candidate of the Sri Lanka Podujana Peramuna, on 7th October and a subsequent and different affidavit shown by his counsel, Ali Sabry PC.”

“Apart from the basic question as to why two distinct affidavits were produced in support of Rajapksa’s candidacy, a question is also raised as to whether Rajapaksa meets the criteria provided in the Constitution as per Articles 91 and 92 of the Constitution in terms of whether he continues to be a citizen of the United States of America.”

“The fact that two different certificates claiming loss of nationality were publicly shared contributed to the confusion and months of debate, with no credible answers provided by the candidate or his team to quell doubt.”

“In addition to the above, we are also alerted to a third affidavit shared by Sabry on his Facebook page which was attested by a Kularatne with no signature belonging to Rajapaksa.”

“Whilst we are not able to comment on the authenticity of these documents, we note that all affidavits were produced by the candidate’s legal team and urges the authorities to immediately investigate the legality of these affidavits and take necessary action.”

“This is essential in the presence of multiple documents that may mislead the voter and rob them of an informed choice. Such conduct also begs the question whether an attempt is being made to subvert the electoral process and the rule of law in Sri Lanka.”

“In a matter of days Sri Lanka will elect a new President and it is imperative that no doubt remains as to the eligibility of the person elected to the office of first citizen in Sri Lanka. It is also paramount that the Election Commission and other officials are independent and impartial and take all necessary steps to protect the integrity of elections,” The two bodies said.

The two bodies called  for legislative reforms that provide the relevant authorities the power to verify documentation submitted by candidates and to take necessary action to prevent confusion and chaos in the future.

In a statement, the party’s general secretary, Ranjith Madduma Bandara said the

June 1, 2021 byNews Admin No Comments
A total of eight civil society organisations and trade unions have made an appeal to the United Nations (UN) to take immediate steps to pressure the Government of Sri Lanka and factory owners in the F