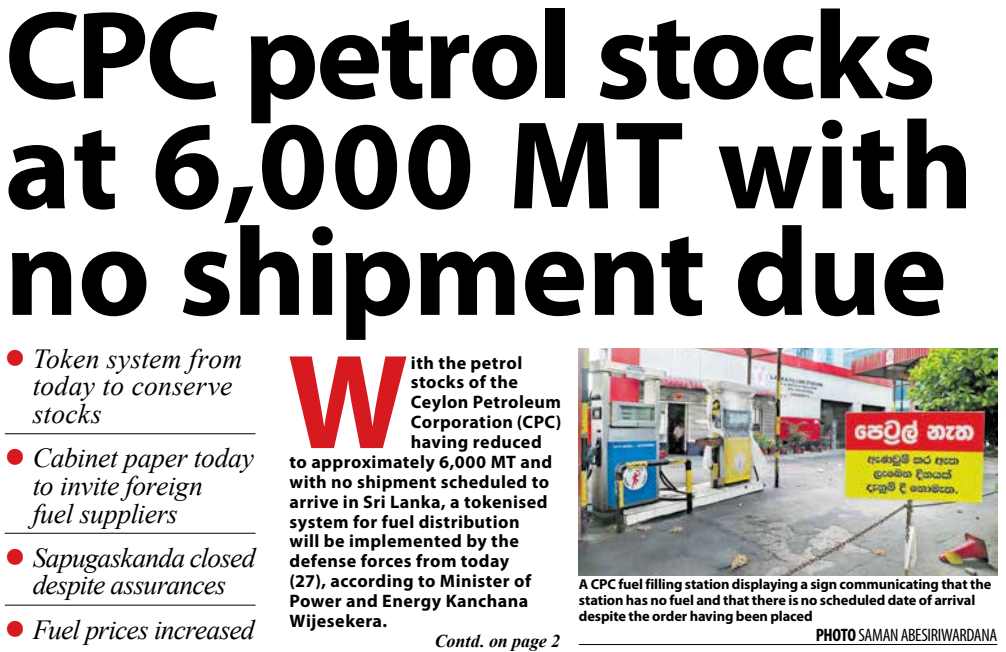 With the petrol stocks of the Ceylon Petroleum Corporation (CPC) having reduced to approximately 6,000 MT and with no shipment scheduled to arrive in Sri Lanka, a tokenised system for fuel distribution will be implemented by the defense forces from today (27), according to Minister of Power and Energy Kanchana Wijesekera.

“CPC has 6,000 MT of petrol at the moment. Lanka Indian Oil Company (LIOC) has 8,000 MT of petrol. LIOC releases about 300 MT to the market everyday. They hope to get their next shipment between 10 July and 15 July, so they have to manage these stocks until then. CPC too has to manage the remaining stocks until we can confirm a supplier and confirm a date for the next shipment. We thus request the public to not queue up for fuel,” Wijesekera said, addressing a media briefing held yesterday (26).

Therefore, he said that it was decided at a defence council meeting on 25 Saturday night that a token would be issued to all fuel consumers, with the consumer’s phone number included, at each fuel shed. He said this would enable the relevant filling station to inform the consumers according to their token number when fuel is supplied to that filling station. The Minister hopes that this would thus eliminate the need to queue up, and requested all consumers outside filling stations to leave once they receive their tokens.

Wijesekera added that public transport and other essential services will be prioritised during fuel distribution.

Commenting on the diesel availability at CPC, Wijesekera said that around 9,000 MT of diesel remains, while it also hopes to purchase another 10,000 MT of diesel from LIOC’s Trincomalee storage terminal.

Wijesekara also announced that a Cabinet paper would be presented today to the Cabinet of Ministers to permit more fuel suppliers similar to LIOC to enter the Sri Lankan market.

“LIOC requested us for 50 new fuel stations and a few fuel stations which are currently operated by CPC, saying that they could supply to these filling stations if such was facilitated. However, we requested that if we provide these filling stations they would also need to increase their import quantity. At the moment they are only supplying 10-15% of the national requirement. Tomorrow’s Cabinet paper is to enable fuel suppliers from oil producing countries to operate filling stations in Sri Lanka. We have 1,190 filling stations in the island and we would allocate 200 or 300 of those stations to each supplier. We will impose one condition, and that is that the suppliers must import fuel on a credit basis from their parent companies, at least for six months to one year.”

Last week, a shipment of petrol was due to arrive in Sri Lanka; however, due to several difficulties that had arisen, CPC was compelled to cancel the agreement with the said supplier.

“CPC owes about $ 700 million to its usual suppliers. We opened a tender for new suppliers but we did not get any bids. Then we assessed the proposals we got, and the supplier who was due to send us a shipment last week was selected through that. We hoped to open the Letter of Credit (LC) on 3 July, but Bank of Ceylon couldn’t open it. People’s Bank finally opened an LC, but the supplier’s international bank – Standard Chartered Bank – rejected it. Then a financial company of the supplier accepted the LC and informed us that the ship would arrive on 22 June. On 23 June, the supplier informed us that there were technical difficulties. They told us that we need to make a financial deposit before they dock at Colombo Harbour,” said Wijesekera.

Wijesekera explained that they had requested the ship to come to Lankan waters so that a sample test of the fuel could be conducted, at the least. However, as the supplier had rejected this request, the ship had gone to India instead.

“We lost that ship and a few other ships that were due to come from that supplier also. We decided that we cannot work with them anymore. Now we are looking for new suppliers,” he said.

Meanwhile, despite the earlier statement by the Ministry of Power and Energy Secretary M.P.D.U.K. Mapa Pathirana that the Sapugaskanda Oil Refinery would not be allowed to be closed, and that the Ministry has ways to ensure its continued operations, the refinery has once again been shut down due to the non-arrival of the crude oil shipment.

Speaking to The Morning yesterday (26), Petroleum Trade Union Confederation (PTUC) Convener Ananda Palitha said: “It is not yet clear when a crude oil tanker will arrive in Sri Lanka. As a result, the Sapugaskanda Refinery has been shut down due to inability to continue operations. An oil refinery cannot be shut down at once, so at present, it is gradually becoming inactive. Its operations will come to a complete halt within the next two to three days.”

He added that the closure of the Sapugaskanda Oil Refinery would cost the country an additional sum of $ 1.1 million a day to meet its fuel requirement. He further claimed that certain groups are planning to increase fuel imports and earn commissions from foreign companies.

“The refinery has been shut down on several occasions and it has cost a lot of money to resume its operations. Having allowed for it to be shut down is a national crime. We have warned on several occasions that the refinery will have to be shut down, but the authorities have repeatedly said that it would not be closed for any reason; however, what we said has come true,” added Palitha.

Power and Energy Ministry Secretary Mapa Pathirana was unavailable for comment on this issue.

Meanwhile, Ceylon Petroleum Corporation Engineers’ Association (CPCEA) had last week told the media that the Sapugaskanda Oil Refinery had not yet been informed of the next arrival of crude oil shipments. Therefore, the CPCEA had stated that the refinery’s activities would have to be restricted from 24 June.

When contacted by The Morning to inquire about this on an earlier occasion, Pathirana stated that steps would be taken to bring in another consignment of crude oil to Sri Lanka within 14 days of the date of the resumption of refining operations at the refinery (1 June). He also said that the Ministry had another “plan” to continue the operations of the refinery, but said it was difficult for him to explain it to the media at that point.

In March, the Sapugaskanda Oil Refinery was closed indefinitely due to the shortage of crude oil, which was caused by the US dollar deficit in the country. The Refinery had to suspend its operations on two previous occasions due to the same issue.

Meanwhile, speaking at a press briefing yesterday Ananda Palitha warned that the shortage of petrol stocks would lead to provision of petrol through personal connections instead of a fair, efficient system, and charged that the remaining stocks were even lower than what Minister Wijesekera had reported.

“If the status for the next shipment is not yet confirmed, from tomorrow, only around 10 filling stations will get petrol. Fuel is issued as personal favourations and using underhand techniques. There is no crude oil for purification and that means further loss of electricity; Kelanitissa alone requires 1,500 metric tonnes. Is this feasible? If that happens, the functioning of the country will stop in the course of two days,” he charged

May 28, 2021 byNews Admin No Comments
The Academy of Health Professionals, an organisation of professionals in the health service, has requested a presidential inquiry into anti-Covid-19 vaccination that has allegedly occurred outside of