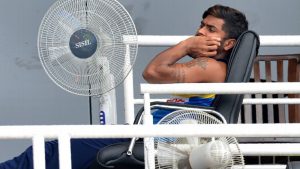 Sri Lanka Cricket (SLC) has denied Niroshan Dickwella a no-objection certificate (NOC) to play in the Caribbean Premier League (CPL), and will also prevent Thisara Perera from playing in the majority of the T20 league, after the two players – and eight others – refused to tour Pakistan in September and October.

According to SLC CEO Ashley de Silva, it is the board’s policy that if there is a national tour for which a player might reasonably be picked, that player will not be granted an NOC to play in a foreign league if he or she withdraws from national commitments voluntarily.

Another SLC official also expressed serious dismay that so many frontline Sri Lanka players had refused to visit Pakistan, despite the fact that the board’s security assessments had concluded that the tour was safe.

“It’s our policy not to give NOCs when there is a national tour, and the players would have known that,” de Silva said. “So Dickwella has not been granted an NOC and will be expected to train with the national team in the next few weeks. We have also asked Thisara to return to the country on September 15, so he can also join the team in training.”

Thisara has already played two matches for St Lucia Zouks after initially being granted an NOC. That agreement, however, was conditional upon his availability for Sri Lanka tours. And although he has refused to go on the Pakistan tour, he now has to return to Sri Lanka.

January 31, 2021 byNews Admin No Comments
The four names that have been sent by Sri Lanka Cricket (SLC) to the Ministry of Youth and Sports are Hemantha Wickramaratne, Kapila Wijegunawardena, Romesh Kaluwitharana, and Waruna Waragoda.