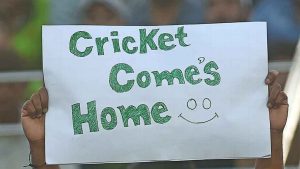 Kevin Roberts, the Cricket Australia chief executive, remains cautious about the prospect of Australia resuming tours to Pakistan but said “things are heading in the right direction” following a brief visit to the country this week.

Australia haven’t played in Pakistan since 1998 (although current Test captain Tim Paine was part of the World XI which travelled for T20Is in 2017) and are not scheduled to visit again until 2022 as per the Future Tours Programme.

ESPNcricinfo reported in May that Roberts’ trip – the first by a CA chief executive in more than ten years – was due to take place and he said he was keen to visit the country well ahead of Australia’s next potential tour but reiterated that CA would never take any risks with the safety of their players and staff. Roberts visited Islamabad where he met with the PCB and Ministry of Interior officials to be briefed on the latest security situation.

“Things are heading in the right direction, but in saying that we were travelling in armoured cars and escorted by police and felt very safe. Certainly, that level of security is still required,” he told SEN radio.

July 20, 2021 byRevatha No Comments
As Lions get back to winning ways