The board of Cricket Australia has decided not to reduce the ball-tampering bans for Steve Smith, David Warner and Cameron Bancroft. 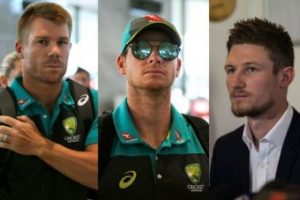 Smith and Warner were given 12-month bans, while Bancroft was handed a nine-month suspension under CA’s Code of Conduct, for their roles in the ball-tampering scandal in South Africa in March.

Bancroft’s ban is due to expire on December 29, while Smith and Warner will not be eligible to return until March 29, 2019.

The Australian Cricketers Association had called for the bans to be lifted, saying the players had “already been punished enough”, in the wake of the release last month of damning reviews into Australia’s cricket culture.

The report found CA was perceived to be “arrogant and controlling”, the consensus being that the organisation did not live up to its values.

The organisation was accused of reverting to “bullying tactics or worse, ostracising” to handle situations which did not go its way.

“The Cricket Australia Board has carefully considered all elements of the ACA submission and has determined that it is not appropriate to make any changes to the sanctions handed down to the three players,” CA interim chair Earl Eddings said in a statement.

“The original decision of the Board to sanction the players was determined after rigorous discussion and consideration.

“Steve, David and Cameron are working hard to demonstrate their commitment to cricket and have our continued support to ensure their pathway to return is as smooth as possible.

“We believe the ongoing conversation about reducing the sanctions puts undue pressure on the three players — all of whom accepted the sanctions earlier this year — and the Australian men’s cricket team.

“As such, the Cricket Australia Board doesn’t intend to consider further calls for amendments to the sanctions.

“Though we recognise that this decision will be disappointing for the ACA, we thank them for their submission.

“Our commitment to continue building a strong relationship between CA and the ACA in the interests of cricket in Australia remains and we look forward to meeting with them shortly to that end.”

The former Australian captain and vice-captain were both dumped from the Indian Premier League [IPL] after the ban, with the pair each losing lucrative $2.5 million contracts for the Rajasthan Royals and Hyderabad Sunrisers respectively.

CA’s decision confirms that Smith and Warner will miss the Australian summer of cricket, which will see the men’s team play Tests against India and Sri Lanka.

Smith is ineligible to hold a leadership position until mid-2020, while Warner is banned from holding a similar position for the rest of his career.

However; the pair, plus Bancroft, will be open for selection in Australia’s squad for the Cricket World Cup — which begins on May 30, 2019 — and then the Ashes series in England which starts with the first Test at Edgbaston from August 1-5.

September 22, 2018 byRevatha No Comments
Afghanistan spinners are the best in the world, says Sarfraz Ahmed after their fighting win against Asia's emerging cricketing nation.

March 7, 2022 byNews Admin No Comments
An all-round performance from Ravindra Jadeja (175 runs and nine wickets) and Ravichandran Ashwin (61 runs and six wickets) helped India register a resounding win in the first Test by an innings and 2