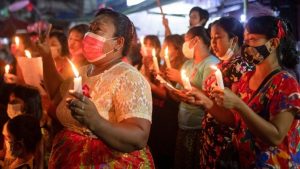 Hundreds of people have rallied in Myanmar’s main city, Yangon, to protest against this week’s military coup, BBC reported today.

They called for the release of the elected leader Aung San Suu Kyi and others detained by the army.

The protest came despite the military’s efforts to stop people mobilising by shutting down social media.

On Friday evening, Telenor, one of the country’s main internet providers, confirmed it had been ordered to deny access to Twitter and Instagram “until further notice”.

The coup leaders blocked Facebook on Thursday for the sake of “stability”.

And on Saturday, unconfirmed reports emerged of a total internet shutdown.

November 1, 2021 byAazam Ameen No Comments
Video footage has emerged on social media which depicts several protesters who have gathered outside the DoubleTree Hotel in Dunblane, Scotland, where President Gotabaya Rajapaksa is reported to be st

January 25, 2021 byMihi Perera No Comments
Prime Minister Mahinda Rajapaksa today stated the people are still suffering from outdated laws, procedures and regulations and added that it was the responsibility of the government to update these l