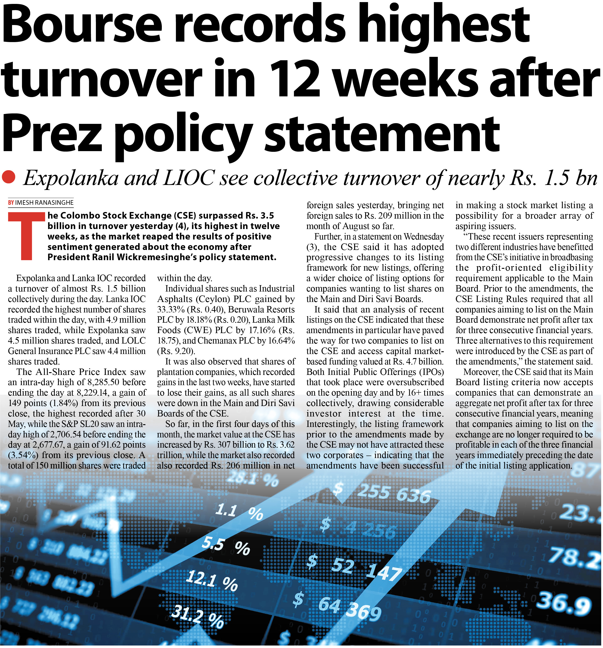 The Colombo Stock Exchange (CSE) surpassed Rs. 3.5 billion in turnover yesterday (4), its highest in twelve weeks, as the market reaped the results of positive sentiment generated about the economy after President Ranil Wickremesinghe’s policy statement.

It was also observed that shares of plantation companies, which recorded gains in the last two weeks, have started to lose their gains, as all such shares were down in the Main and Diri Savi Boards of the CSE.

Further, in a statement on Wednesday (3), the CSE said it has adopted progressive changes to its listing framework for new listings, offering a wider choice of listing options for companies wanting to list shares on the Main and Diri Savi Boards.

It said that an analysis of recent listings on the CSE indicated that these amendments in particular have paved the way for two companies to list on the CSE and access capital market-based funding valued at Rs. 4.7 billion. Both Initial Public Offerings (IPOs) that took place were oversubscribed on the opening day and by 16+ times collectively, drawing considerable investor interest at the time. Interestingly, the listing framework prior to the amendments made by the CSE may not have attracted these two corporates – indicating that the amendments have been successful in making a stock market listing a possibility for a broader array of aspiring issuers.

“These recent issuers representing two different industries have benefitted from the CSE’s initiative in broadbasing the profit-oriented eligibility requirement applicable to the Main Board. Prior to the amendments, the CSE Listing Rules required that all companies aiming to list on the Main Board demonstrate net profit after tax for three consecutive financial years. Three alternatives to this requirement were introduced by the CSE as part of the amendments,” the statement said.

Moreover, the CSE said that its Main Board listing criteria now accepts companies that can demonstrate an aggregate net profit after tax for three consecutive financial years, meaning that companies aiming to list on the exchange are no longer required to be profitable in each of the three financial years immediately preceding the date of the initial listing application.

May 19, 2020 byCharindra No Comments
Dialog Axiata PLC has announced that it is reimbursing up to Rs. 1,000 for every bill paid by its customers, in a bid to encourage them to settle large outstanding bills.

SLTPB gears up for World Expo

January 17, 2021 byRusiru Keppetipola No Comments
Despite almost missing the Expo 2020 Dubai before it was postponed due to the pandemic situation, this time, Sri Lanka is on track to participate at the World Expo that will be held in Dubai..