There was, of course, a little collapse. There always is. Sri Lanka were 89 for 1 at one stage, a solid foundation seemingly almost laid. Then they lost three wickets for 13 runs to the spin of Moeen Ali and Adil Rashid in a frazzled passage of play in which a stumping and a run out chance were also missed. 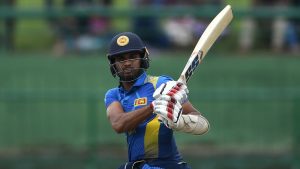 Dasun Shanaka pulls through the leg side

But the lower middle order came through, for the hosts. Dasun Shanaka produced Sri Lanka’s best innings of the day, hitting a run-a-ball 66 before getting himself run out just as he was starting to strike some big blows in the late overs. Thisara Perera made 44 off 41, holding the fort after Shanaka’s dismissal. The most surprising contribution was that of Akila Dananjaya, who with characteristic tenacity, made 32 not out off 26 balls, hitting a six and a four in succession in the final over.

All this meant that for the first time in fve games, Sri Lanka can claim to have reached a respectable total. Having seemed destined for another sub-200 score at 102 for 4, they somehow hauled themselves to 273 for 7 in their 50 overs. Whether that is enough to deny this rampaging England batting order is besides the point, because given the few weeks that Sri Lanka’s batsmen have had, the fact that they have not lavishly embarassed themselves here is enough to bring a tear to fan’s eyes.

April 29, 2021 byRevatha No Comments
Inter-school Under-19 Division-I Tier A Cricket