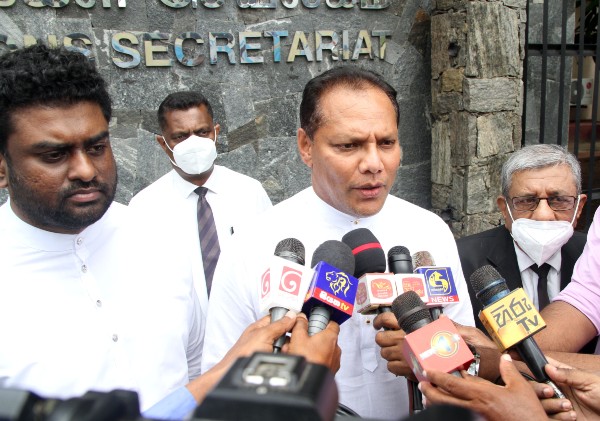 Dayasiri to resign only if SLFP leaves Government

The Batik, Handloom and Local Apparel Products State Minister Dayasiri Jayasekara has claimed that he is ready to resign from his State Ministerial post at any time if the Sri Lanka Freedom Party (SLFP), of which he is the General Secretary, decides to leave the current Government.

Speaking to the media in Colombo yesterday (7), he said that he had informed of his stance at a recent meeting of a group of SLFP Parliamentarians. Adding that resignation from the post of State Minister would not be a problem for him, Jayasekara said that he, as the SLFP General Secretary, is working for the betterment of both the SLFP and the country.

Jayasekara recently claimed that Basil Rajapaksa and the President’s Secretary, Dr. P.B. Jayasundara had created State Ministries based on subjects such as clay, cinnamon, pepper and batik, which were ridiculed by the people. In response, several SLPP members had claimed that Jayasekara should resign if he was not happy with the State Ministerial post he had received.

When queried about the recent statements made by SLPP members that Jayasekara should resign, he said that he is not ready to resign merely because of such statements.

“I’m not ready to resign just because they say so; but I will not hesitate to step down at any moment if the SLFP decides to do so,” he claimed.

He added that he would agree with any decision which would be taken by the SLFP Chairman and Parliamentarian Maithripala Sirisena, senior Party members and the Party’s Central Committee.

December 23, 2021 byNews Admin No Comments
Strained hospitals bracing for a Covid-19 surge caused by the quickly spreading Omicron variant could face another grim possibility: preliminary experiments suggest that most of the antibody treatment