DDS likely to be benched at the World Cup? 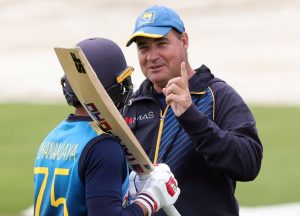 Dhananjaya de Silva is likely to be restricted to be a reserve of the Sri Lanka team for the T20 World Cup starting next month. Here is de Silva (on left) with Sri Lanka Head Coach Mickey Arthur during a net session at Bristol, England in July

“He will be dropped from the squad for the sheer understanding that he is not a batsman who is suited for the T20 (Twenty-20) format,” the source said.

Sri Lanka has already named a 15-member squad meeting the 10 September International Cricket Council (ICC) deadline for announcing the finals squad, mainly for logistical reasons. Changes can be made before 10 October on the final combinations.

The seventh T20 World Cup is hosted by India though it is held in the United Arab Emirates (UAE) and Oman for the Covid-19 situation in India.

The 16-country tournament, organised by the ICC, will consist of a total number of 45 matches. The tournament will be held from 17 October to 14 November.

Two may be replaced by the extra nine

In the above Additional Player list, there are at least three players who can bat in the top order: Minod Bhanuka, Pathum Nissanaka, and Ashen Bandara.

“Who is going to replace Dhananjaya is not clear. But he won’t be in the final squad most probably,” the said SLC source further confirmed.

Anyway, the replacements will be made on the injured fast-bowling all-rounder Lahiru Madushanka, and de Silva, from the nine players, who have been listed among the Travelling Reserves and the Additional Players.

Another contentious issue is hovering over de Silva’s possible omission from the T20 World Cup final squad of 15. That is the allegation that has already been made by the team’s coaching staff on the player’s commitment.

As we in the Morning Sports highlighted recently, Sri Lanka team coaching staff had discussed about two all-rounders being not giving their full commitment to the team during the previous South Africa T20 International series, which the Lankans lost 3-0.

“His poor commitment will also be a matter of concern. When you don’t give your 100% to the team and it is evident clearly, the team’s hierarchy will naturally lost faith in him and consider him as an agent of the unhealthy forces outside the team that is expecting their failure,” the source added.

October 20, 2019 byThe Sunday Morning No Comments
Opener Rohit Sharma struck his third century of the series, 117 n.o., and Ajinkya Rahane was unbeaten on 83 as India were 224/3, after once being 39/3, when bad light stopped

April 22, 2022 byNews Admin No Comments
Arsenal got their pursuit of a place in the English Premier League’s (EPL) top four back on track as they ended a run of three defeats with a crucial 4-2 victory over Chelsea on Wednesday (20) at Stam