Debunking some ‘arrant nonsense’ about inflation

“Mainstream economics is replete with ideas that ‘everyone knows’ to be true, but that are actually arrant nonsense.”

Jeremy B. Rudd, a Governor on the Board of the Federal Reserve (the US’ central bank) wrote the above in a paper published in September, disproving the theory of “inflation expectations” – that expectations of a rise in prices are what drive an actual increase in the rise of prices.

The “inflation expectation” theory is the latest in orthodox economics’ inability to fully conceptualise and explain inflation. This theory was preceded by the monetarist view that inflation is caused by “too much money chasing too few goods”. This Quantity Theory of Money (QTM) is perhaps best summed up in the famous quote by Milton Friedman who claimed that “inflation is always and everywhere a monetary phenomenon”.

The QTM has largely been debunked in advanced capitalist economies, where massive liquidity injections have done little to raise the overall price level (Figures 1 and 2). However, it remains in vogue in developing countries like Sri Lanka, often to the neglect of discussion on more urgent matters like long-term industrial policy. 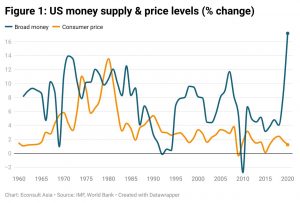 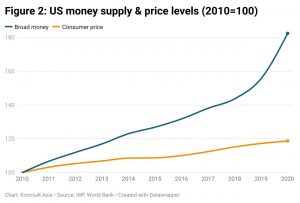 What is inflation, and who does it hurt?

Inflation entails a rapid rise in the general price level of an economy. This at once is an abstraction, because different categories of goods react differently to different stimuli. A rise of the “general price level” must mean that there is a single factor that can drive up the price of everything from steel to rambutan. In practice, price levels of specific categories of goods may rise and fall according to the patterns of investment and consumption, and bottlenecks in their supply chains.

Fear of inflation is justified in so far as it erodes real wages, increases cost of living and production, heightens inequality, and spurs speculative activity such as hoarding. However, inflation does not affect everyone equally and is less destructive than deflation. Historically, among the strongest lobbies against inflation are creditors and the financial community. Inflation hurts creditors (and favours debtors) because it eats up the real value of debt.

In the Sri Lankan context, moderate levels of inflation in domestically produced food can constitute a transfer of wealth from urban consumers to indebted rural producers – raising their incomes while shrinking the real value of their debts (though the existence of middlemen complicates this transaction). Similarly, manufacturers do not share the same zeal against inflation as financiers because their products can be sold for a higher price while the real value of their debts to banks diminishes.

A socially and geographically specific abstraction

While inflation confronts us as a hard statistical fact, in reality they are an abstraction of a culturally, socially, and geographically specific phenomenon. This is because the basket and weightage of goods used to measure inflation varies from locality to locality. For example, the price of beef and cheese may matter more in Denmark where these commodities are major sources of protein and fat. But for the reasons outlined above, it is more important in Sri Lanka to consider prices of fish and coconut, which are the staple sources of protein and fat. The vast majority of Sri Lankans may not care about rising cheese prices, but they may certainly riot if the price of a coconut crosses a certain threshold.

Similarly, consumption patterns can vary greatly even within national borders, making national figures something of an abstraction too. Let’s take a simple source of protein like balaya fish (skipjack tuna), which is a ubiquitous staple in the Southern Province where around 75% of balaya is fished. The existing infrastructure enables balaya to be popularly consumed along the western coast, perhaps as far up Puttalam. However, this changes drastically in other districts. For inland Kandy, the price of lake fish or tinned and dried fish may be more relevant for geographical reasons. For Jaffna, the price of paraw fish (trevally) or crustaceans like shrimp and crab may be more relevant due to the local marine ecosystem. Therefore, even national indicators of inflation hide regional, and sometimes cultural, variances.

According to the Fisher Equation, a tool used by QTM proponents, MV=PT – where M is money supply, V is velocity of money, P is the average price level, and T is the volume of transactions in the economy. The theory holds that an increase in money supply would lead to a proportional increase in prices. The caveat is that the velocity of money and the volume of transactions in the economy are assumed to be constant, which is simply not true in the real world (Figures 3 and 4). 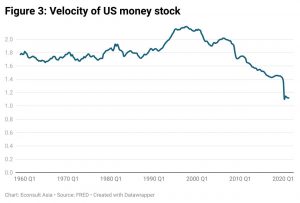 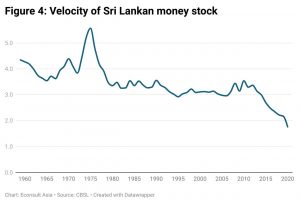 Back to the Sri Lankan context, we see that disposable income for the majority of citizens changes based on factors such as the agricultural cycle and tourist season. Consumer behaviour is also influenced by marketing and advertising efforts which can create fresh demand for new products. Meanwhile, external shocks like the Covid-19 pandemic and ensuing lockdowns have throttled the velocity of money and volume of transactions in the economy.

The QTM is further problematised by its assumption that there is a direct pipeline from the proverbial “money printer” to the pockets of consumers and investors in order to create a proportionate rise in demand. In practice, this is not the case. By “printing money”, central banks create assets which are then leant to commercial banks. These register as liabilities for the banks and incentive to issue corresponding assets in the form of credit to the private and public sector. However, most of this “printed money” will remain as excess liquidity in the banking sector which is mopped by the Central Bank in the form of issuing Treasury bills or placed overnight in repo markets.

Sri Lanka is dependent on the importation of commodities such as wheat, sugar, and milk, as well as intermediate goods such as fuel, fertiliser, and pharmaceuticals – the prices of which are often determined not by the market but by multinational cartels. Global commodity price hikes and supply chain disruptions, therefore, have a strong impact on the domestic price level. The post-Covid boom in prices is a case in point, with record oil and shipping costs being particularly damaging (Figures 5 and 6). A domestic monetary tightening in response to such external shocks would merely increase the cost of domestic production further, triggering layoffs, reducing growth, and therefore the possibility of recovery amid a recession. 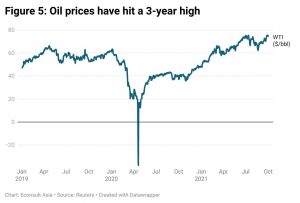 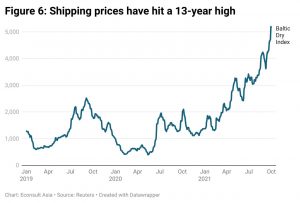 Figure 7 depicts Sri Lanka’s consumer price levels alongside factors such as money supply, crude oil prices, and the FAO (Food and Agriculture Organisation) Food Price Index. A clear divergence between money supply and inflation is evident, alongside a correlation between currency devaluation and levels of inflation. Therefore, a combination of import dependency and a yawning trade deficit applying downward pressure on the exchange rate can be seen to be one of the primary causes of domestic inflation. Devaluation has not served to reduce demand for imports, nor has it induced foreign sufficient investment inflows and export revenue to bridge the balance of payments. 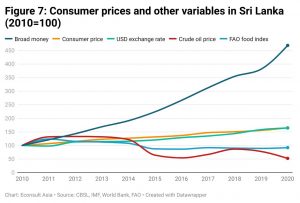 ‘Produce or perish’ under rising prices

In the absence of domestic production, and due to the inability or refusal of importers to better manage price risks, government intervention in the form of price controls, rationing, and state trading monopolies become a necessity. If prices are a function of cost of production, and supply and demand, a sustainable solution for inflation is to find ways to reduce the cost of production and distribution, and increase supply. For example, lower interest rates for domestic producers can help increase output and therefore domestic supply. Increased supply must also be matched with infrastructure that can circulate such supplies. To go back to the example of balaya, there is no use in increasing the catch if it’s just going to rot in the harbour with no way to reach consumers.

As we have shown, the causes of inflation are often beyond the realm of money supply. In the case of Sri Lanka, a multitude of structural factors contribute to inflation. Sri Lanka’s economy is heavily service-oriented, with 47% of employment and 60% of GDP dependent on this sector. Meanwhile, 27% of outstanding loans and advances from commercial banks are towards services, with a further 26% for personal consumption. By allocating labour and financial resources to import-dependent luxury services like tourism, while neglecting manufacturing and agricultural production that could be traded internationally or consumed domestically, the system is rigged towards an inflationary tendency. 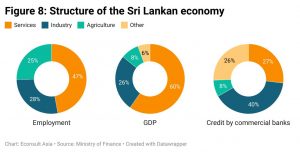 The need of the hour is not to pursue deflationary monetary policy that would suppress growth. Rather, monetary policy should be harnessed as a key lever by which to transform the structure of the economy towards production. In this regard, Sri Lanka should learn from the experience of state-led development banks in East Asia, which have been a cornerstone in that region’s industrialisation.

(The writer is a Global Macro Research Analyst at Econsult Asia, which is an economic research and management consultancy firm with an alternative development outlook.)

January 26, 2020 bySarah Hannan No Comments
The air quality forecast for Colombo will reach “unhealthy for sensitive groups” level (101-150) on 27-29 January.

January 25, 2021 byMihi Perera No Comments
A total of 653 COVID-19 recoveries were reported today, increasing the total number of recoveries to 50,337.