Decision on bringing Ranjan to Parliament in three weeks: Speaker 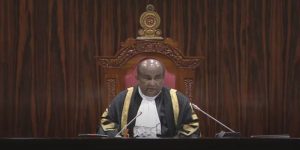 Speaker Mahinda Yapa Abeywardane today asked for a period of three weeks to arrive at a final decision on bringing Ranjan Ramanayake to parliament and his seat in parliament.

He was responding to a question raised by Leader of the Opposition Sajith Premadasa regarding Ranjan Ramanayake’s seat in parliament.

Ramanayake was sentenced to four years rigorous imprisonment by the Supreme Court for contempt of court.

Speaking further, the Speaker said that MP Premalal Jayasekara , who is on death row, was allowed to attend Parliament after conducting a proper study and looking into the legal background.

The Speaker said that the final decision will be taken after obtaining legal advice.

He also instructed the Members of Parliament to submit their written submissions within the next two weeks.

DIG Bimshani must be encouraged and not opposed: UNP

February 18, 2021 byLahiru Pothmulla No Comments
The United National Party (UNP) today expressed their support to Deputy Inspector General (DIG) of Police Bimshani Jasin Arachchi and said the DIG must be encouraged and not opposed.