Deep diving into the world of freshwater fish in Sri Lanka

November 9, 2021 by Venessa Anthony No Comments

Sri Lanka is blessed with a number of freshwater fish species, and their ecology and genetic traits can unravel hidden stories about their evolution. The Wildlife and Nature Protection Society (WNPS) Youth Wing will be hosting a webinar featuring Hiranya Sudasinghe who will talk about freshwater fish in Sri Lanka. 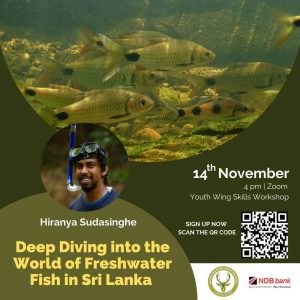 Sudasinghe received his bachelor’s degree in zoology at the University of Peradeniya, from which he graduated with a First Class Honours. He completed his master’s degree at the same university and is presently reading for his PhD at the Institute of Ecology and Evolution of the University of Bern and Naturhistorisches Museum Bern, Switzerland.

His doctoral project is on understanding the genomic consequences of miniaturisation in zebrafish relatives, making him the perfect candidate to explore the subject of the underwater world. Sudasinghe is the lead author of some two dozen scientific papers, principally on the phylogenetics and taxonomy of Sri Lankan freshwater fishes.

Brunch had a chat with him to learn more about what to expect from the webinar. He explained that he will be dividing the discussion into two themes, one being a general introduction to freshwater fish in Sri Lanka and the other being an explanation on the work he’s conducted in Sri Lanka on the fish and a detailed explanation on these projects.

Most of the data he’s gathered on fish include genetic data and distributional records. “In order to understand the evolutionary relationships in these fish, a lot of genetic data is required, and previously, it had not been done in Sri Lanka. Based on our data, we were able to find out more details on their genetic structures and their relationships with India as well as with other species,” he said. This also helped him observe general patterns between various species and helped them come to a conclusion on freshwater fish distribution patterns in the country.

Sudasinghe told us that the diversity of the freshwater fish genus Rasbora (Cyprinidae) in Sri Lanka (five species) is high compared with the four species reported from the peninsula of India, from which the island’s cyprinid fauna is derived.

“The book will provide an overall introduction on the areas of research that have been done on the biogeography and ecology of Sri lanka. We took flora and various other insects as examples to understand how the distribution of the biodiversity here can be explained,” he stated. The last two chapters will have an in-depth focus on freshwater fish in Sri Lanka and will be based mainly on the work that Sudasinghe has done in the country.

According to Sudasinghe, the paucity of characters by which species of Rasbora can be phenotypically distinguished makes field identification difficult, adversely affecting the estimation of populations and distributions, with consequences for conservation and management, increasing also the risk of taxonomic inflation. “The four endemic species exhibit a pattern of inter-basin dispersal via headwater capture, followed by vicariance, explaining the high diversity of the genus on the island,” he noted.

Moreover, he noted that there are certain fish which are found only in a limited area, and the major threat he sees currently is habitat destruction. “If you look at freshwater fish diversity, almost all endemic species are confined to the wet zone of the island, and the wet zone itself is the most populated part of the island in terms of humans,” he explained, adding that if one were to look at the population there, habitat damage caused by them is more severe.

He also observed that there are many streams and rivers that are outside protected areas so more harm can be caused to the fish that reside in these unprotected waters. Therefore, the threat to these fish is more severe. “I think awareness amongst the communities is an important starting point when it comes to conservation. For example, if a particular fish that native to a certain habitat and goes extinct from that particular area, it goes extinct from the whole world,” he explained.

He also noted that there is still much we don’t know about these fish, but he hopes to understand the species better in the future, so we can all work on conserving both the species and the habitat.

The webinar will be held on 14 November at 4 p.m. via Zoom. To access the link, visit their Facebook page.

October 25, 2018 byJennifer Anandanayagam No Comments
Traditional highlights and favourites are coming back to the sports centre arena at the Hilton Colombo when the much looked forward to annual event, the Oktoberfest takes place from 1 to 10 November.