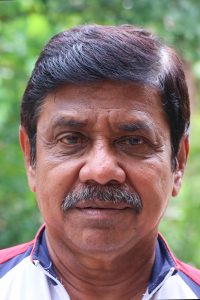 The public can pay their last respects to Bandula Warnapura at residence No. 159/1, Alakeswara Road, Kotte till 4 p.m. today (19).

The funeral organisers inform that the attendants to the funeral need to refrain staying for long, due to the present pandemic situation, and only 50 people can be present at one moment.

The funeral will take place today at 4.30 p.m. at the Borella Cemetery.

Sri Lanka’s first Test cricket Captain Bandula Warnapura passed away yesterday (18) at the age of 68. He had passed away while receiving treatment at a private hospital in Colombo, sources said.

He had been hospitalised earlier this month after he was diagnosed with high sugar levels and, according to reports, was recovering after having had his right leg amputated.

Following are condolences made by dignitaries, past Captains, and players on Warnapura’s passing yesterday.

I am deeply saddened by the demise of the first Sri Lankan Test cricket Captain, Bandula Warnapura. My deepest condolences to his loved ones. May Mr. Warnapura’s contribution to cricket be forever remembered by fans around the world!

Saddened to learn about the sudden demise of Sri Lanka’s first Test cricket Captain Mr. Bandula Warnapura. My heartfelt condolences to his family and well wishers. May he attain Supreme Bliss of Nibbana! 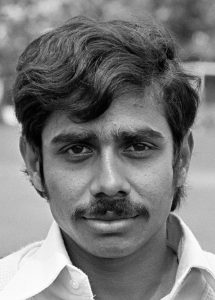 Warnapura in 1975 at the age of 22 in Eastbourne, England

We wish to express our condolences to the family at this difficult time on behalf of SLC’s cricketing fraternity.

Warnapura who led Sri Lanka to its first-ever Test match against England at the P. Saravanamuttu Stadium in 1982, was also a much-respected cricket administrator having held the position of Director, Cricket Operations at SLC and also served the Asian Cricket Council (ACC) for many years.

He was also a much-admired cricket commentator and shared his wealth of knowledge and experience on the sport on several television platforms.

Bandula Warnapura, who was 68 years old at the time of passing away, leaves behind his beloved wife, daughter, two sons, and grandchildren.

My deepest condolences to his family. May he attain the supreme bliss of nibbana!

Deeply saddened to hear of the passing of Sri Lanka’s first Test Captain Sir Bandula Warnapura. My deepest condolences to his family at this difficult time! May you attain the supreme bliss of nibbana!

It is a very sad occasion. Not only for me but all of us in Sri Lanka who knew Bandula. We have had many good memories in the past playing together. We started together playing for the national team. It is a sad ending. May his soul rest in peace and may God bless his soul! In this hour of need our prayers are with his family. And I hope they will be able to take this because it is a very sad thing to hear. 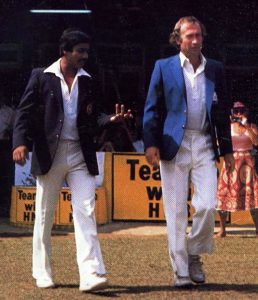 The iconic photo of two captains going to toss in Sri Lanka’s inaugural cricket Test at P. Sara Oval in Colombo on 17 February 1982. On left is Warnapura, Sri Lanka’s Captain, with the coin in hand, with Keith Fletcher, the England Captain

I was greatly saddened to hear about the demise of my first Test Captain Bandula Warnapura. He was not only a mentor, but also an elder brother to me. From the very early days of my cricketing career, he ensured that I was always protected. Bandula ayya saw the unique abilities of young cricketers and did all he could to safeguard their future. I am one such example.

What I admired most about Bandula ayya was his unwavering love for the game of cricket. His cricketing knowledge was unparalleled, and it was reflected on his contribution to the game through his coaching, as well as his time as an administrator. Even during the latter part of his life, he was openly critical of wrongdoings that were detrimental to the game of cricket in Sri Lanka.

I feel as though I’ve lost one of the few people who was fearless in the fight against these disreputable elements in the game of cricket.

May you attain the Supreme Bliss of Nibbana!

Bandula’s demise is a very sad thing for me. We played for Sri Lanka together even during our school days, as we are only a year apart. He was one of persons who helped me a lot when I came to the game as an outstation player. As a senior, he helped me a lot during my first tour to India in the 1970s. Though we didn’t meet frequently in recent years, we talked to each other over the telephone quite often. His loss at this kind of age is a great loss to the game as well as to the future generation of our cricketers. I express my sincere condolences to Bandula’s beloved wife and his children.

When you see Bandula’s death, it is a great loss for the country. I can remember the way back in 1979 going for the World Cup. Then I was just a schoolboy. Ranjan Madugalle, Sudat Pasqual, and myself were the three schoolboys who were selected for the ’79 World Cup. I can say that Bandu was a father to everybody. He was always looking at the best way to help each one, and especially the youngsters, he was a father figure, a mentor.

And after that coming to the cricket board even, starting with the Under-19 somewhere around 2006, Bandu was the main person in the operations unit. With his planning, he knew what he was doing. What really mattered to everybody is that he was a great leader who wanted to help each one, and at the same time, not to do the wrong thing and help. That was a main thing I saw from Bandu. Whether the player is from the school or club, he was helping if he is good.

We miss him and we know that the others will follow in his footsteps to help the future cricketers.

It is a sad day that the first Test Captain Bandula Warnapura has played his last innings. RIP! We will miss you sir!

It’s Sad to hear the news of SL first test captain Bandula Warnapura’s demise after a brief illness. Thoughts are with his wife and children.. He coached me at Nalanda and was a steady influence in my growth as a cricketer and a person. May you attain Nibbana Sir !!! Folded hands

Deeply saddened by the passing away of Bandula Warnapura. He did immense service to Sri Lankan and Asian cricket as a player and an administrator. It was such a joy to chat to him on everything cricket. A good and gentle man. We will miss him. Our thoughts are with his loved ones

Shocked and sad to hear the passing of our first Test Captain, a humble gentleman who has served the game with passion and love for so many years! May you RIP sir! Thoughts and prayers with family and friends!

It is really sadness to hear that our first Test Captain sir Bandula Warnapura has passed away. My thoughts and prayers are with his family. May you attain nibbana sir!

Sir Bandula Warnapura, Sri Lanka’s first Test cricket Captain and the man who paved way for us to become a Test playing nation has passed away. My thoughts and prayers are with his family.

May he attain supreme bliss of Nibbana!

Sad to hear that our first Test Captain Mr. Bandula Warnapura has passed away. My deepest condolences to his family! May you attain the supreme bliss of nibbana sir!

Saddened by the passing of Bandula Warnapura sir. My deepest sympathies to the family and friends! Luckily I had the privilege to learn from him when he was managing the Sri Lanka Under-15 team in 2000 and his mentorship made a huge impact on my life and I’m forever thankful to him

Our weekly Tennis Column by Dinith Pathiraja: How to choose a tennis racket