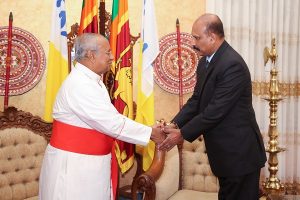 The Secretary to the Ministry of Defence Major General (Rtd) Kamal Gunaratne met with Archbishop of Colombo His Eminence Malcolm Cardinal Ranjith today.

The discussion took place at the Archbishop’s House in Colombo.

According to the Defence Ministry, the Secretary and Archbishop of Colombo Malcolm Cardinal Ranjith discussed issues of mutual interest.

June 16, 2020 byTSM Web Desk No Comments
The Central Bank should get its act together and implement government policies to revive the economy, President Gotabaya Rajapaksa told top officials of the Central Bank today.

December 14, 2018 byEaswaran No Comments
The Supreme Court today refused to stay a stay order issued by the Court of Appeal against the appointment of Mahinda Rajapaksa as Prime Minister and against his cabinet from holding office.