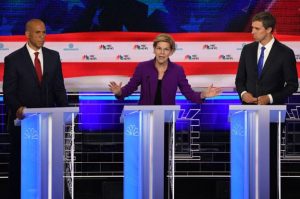 Ten Democrats have clashed in the first TV debate of the race to oust President Donald Trump from the White House.

Liberal firebrand Elizabeth Warren, who has been gaining momentum, took centre stage at the heated forum in Florida.

Candidates sparred over healthcare and immigration, and a couple of underdogs gulped much-needed political oxygen with zingers on Mr Trump and abortion.

Ten other Democrats in the crowded field, including Joe Biden and Bernie Sanders, will battle on Thursday night.

Millions of voters were expected to tune in for America’s biggest political debates in years.

What were the flashpoints?

In Wednesday night’s two-hour debate in Miami, the candidates at times engaged in shouting matches as they vied to grab the limelight.

Warren, a Massachusetts senator who has been surging in opinion polls, was one of only two contenders to say she supports replacing private medical insurance with government-run healthcare.

Taking aim at her rivals, Warren drew loud applause as she said: “There are a lot of politicians who say, ‘oh, it’s just not possible’… what they’re really telling you is, they just won’t fight for it.”

But Minnesota Senator Amy Klobuchar said: “I am just simply concerned about kicking half of America off of their health insurance in four years.”

Former US congressman John Delaney also warned against such a policy.

Beto O’Rourke, another ex-congressman, was first to show off his command of Spanish, saying that a stable democracy should “listen to all voices”.

But the one-time liberal golden boy found himself under heated attack from former Obama housing secretary Julian Castro, the only Latino in the race.

Castro challenged O’Rourke to support his plan to decriminalise illegal immigration, lecturing his fellow Texan to “do your homework”.

Ohio congressman Tim Ryan insisted the US must stay “completely engaged” in the Middle East.

But Tulsi Gabbard, an anti-war Hawaii congresswoman, hit back: “Is that what you will tell the parents of those two soldiers who were just killed in Afghanistan?”

The studio audience also cheered Warren as she delivered an impassioned soundbite on economic populism, looking to cement her surge in the opinion polls.

“Who is this economy really working for?” she said. “It’s doing great for a thinner and thinner slice at the top.”

Warren, the only top-tier candidate on the stage, concluded: “We need to make structural change in our government, in our economy and in our country.”

New Jersey Senator Cory Booker was the only candidate who did not raise his hand when asked whether he would sign back on to the 2015 Iran nuclear deal as it was originally negotiated under the Obama administration.

When Washington state Governor Jay Inslee boasted of his record on reproductive rights, Ms Klobuchar drew applause for retorting: “There’s three women up here who have fought pretty hard for a woman’s right to choose.”

Inslee recovered later when asked by a moderator what is the biggest geopolitical threat to the nation, and he replied to loud acclaim: “The biggest threat to the security of the United States is Donald Trump.”

De Blasio distinguished himself on a question about gun violence, saying: “There’s something that sets me apart from all my colleagues running in this race and that is for the last 21 years I’ve been raising a black son in America.”

He said his son, Dante, has to use “special caution because there have been too many tragedies between our young men and our police”.

What was the president’s reaction?

All the top 20 Democratic candidates need to demonstrate they have the electoral viability and political grit to defeat the Republican president.

But Trump, who is running for a second term in office next year, seemed unimpressed as he watched the debate aboard Air Force One en route to Japan for a G20 summit. BBC

March 16, 2019 byRandev No Comments
The main suspect in the mosque shootings that killed 49 people in New Zealand on Friday has appeared in court on a single murder charge.