Derana-Fair and Lovely City of Dance 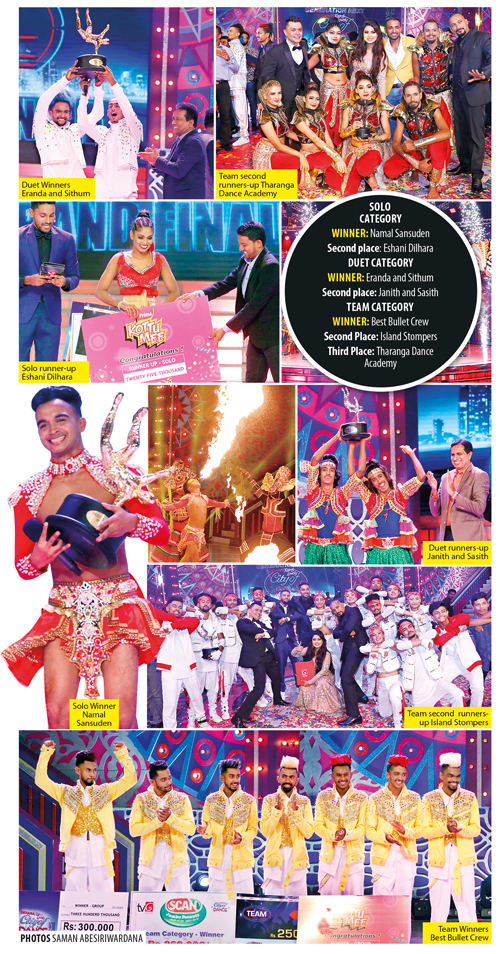 Last Saturday, 21 September, the sixth season of the Derana-Fair and Lovely City of Dance competition held its grand finale, “Generation Next” at the Maharagama Youth Centre with hundreds of guests, dance enthusiasts, contestants’ family members and friends, and celebrities in attendance.

This year’s competition was held under three categories: duet, group, and solo acts. The duet round was introduced for the first time in the six-year run of the show.

Since 2009, when the show premiered, City of Dance has been a popular show that has made waves, coming on air every other year, providing a platform and fantastic opportunity for many young dancers to showcase their skills.

In 2019, the competition held its first audition in February. Following the audition round, contestants would go through one more such round and get selected into a pool of 25 for each category. Out of this group, 15 would then go on to compete on stage where contestants will move forward on the merit of each performance. If at this stage, the contestants’ statuses to the next round are pending, by judges’ votes, they would be allowed an opportunity battle it out with another contestant to win their spot in the next round.

There are a total of five on stage rounds that are televised. These lead up to a semi-final round and the grand finale where the winner is determined by judges’ votes, which accounts for 50% of the total score, and the other 50% is determined by SMS votes sent by the public.

If you are a first-time viewer of the show and wish to follow any of the contestants who take your fancy, all televised episodes are now available online.

City of Dance is unique in that the fate of the contestants are not left for chance as a skilled panel of judges inclusive of Pooja Umashankar and renowned dance gurus Sathis Hettithanthri and Kevin Nugara this season made sharp and calculated decisions based on performance and technical skills.

The show is truly an eye-opener as we are able to see an immense variety of talented Sri Lankan youth, many absolutely mind-blowing in their talent, passion, dedication, and technical prowess.

This year’s finale came to a tremulous end with a tiebreaker necessary for the grand prize of Rs. 1 million, which is awarded to the winner in the group category of “Best Dance Crew”.

Some drama transpired in the newly introduced dual category where the crowd favourites – widely recognised as the underdogs of the competition – Janith and Sasith became runners-up.

Derana-Fair and Lovely City of Dance grand finale – Generation Next was a glamorous show with dazzling performances and left many vowing not to miss a single episode come next season when the show returns with its seventh instalment.

Congratulations to all the winners!

Stigmata live at The Floor By O: The Victory Show

October 30, 2018 byJennifer Anandanayagam No Comments
From being featured on prominent media networks such as BBC and Discovery Inc, Stigmata is our home grown metal ensemble that has prevailed in the local music industry for almost twenty years now.

Launch of ‘Review of the Southern Border of Sinharaja’

December 5, 2018 byJennifer Anandanayagam No Comments
Sinharaja is Sri Lanka’s flagship for conservation of rainforests and it is the only National Wilderness Heritage area that receives the highest level of legal protection under Sri Lankan conservation