Detection of agro-waste containers: Mounting garbage in the isle 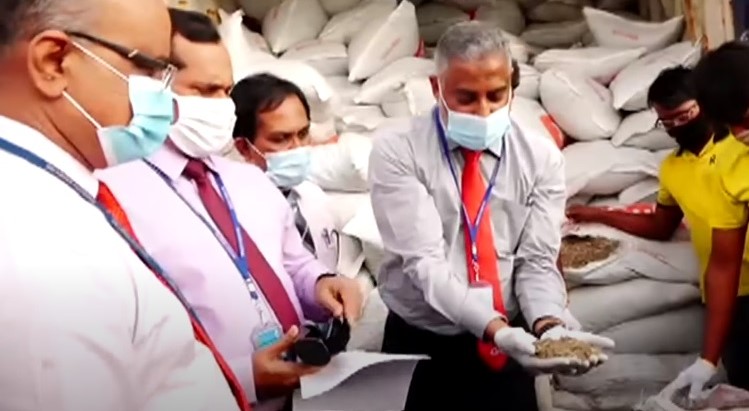 Environmentalists have raised concerns over the importation of a consignment of agriculture waste to Sri Lanka from Ukraine even before the completion of reshipping the controversial garbage containers imported from the UK.

They alleged that the importation of garbage has now become a practice, and urged the Government to conduct an immediate investigation to find out the importer of the waste containers and take necessary legal action against them.

Speaking to The Sunday Morning, Centre for Environmental Justice (CEJ) Executive Director Hemantha Withanage stressed that it is important to find out the real importers, as the companies under which the importations have been done were not big names.

“Without the support of an influential person, such garbage containers cannot be brought down to the country. Even if the names in the list are not big companies, it (authorities) should investigate the connections of those companies,” he alleged.

According to Customs, following the initial investigation, the cargo declared as carrying “whole coriander seeds” imported from Ukraine was revealed to have contained eight consignments of agricultural plant waste. The consignment was exported to Sri Lanka from Agronika Trade LLC in Ukraine. Initially, eight containers had arrived in Sri Lanka on 10 December 2020, while another 20 containers had arrived on 21 December 2020, it is learnt.

Customs also stated that the consignment was accompanied by a phytosanitary certificate from the State Service of Ukraine on Food Safety and Consumer Protection (SSUFSCP), which is the competent authority to certify the quality of the agricultural goods.

Following the initial investigation, the Central Environmental Authority (CEA) had recommended the re-exportation of the containers with immediate effect.

The possibility of bringing down container loads of waste to Sri Lanka has been questioned by many, as this is the second time the country is facing such a situation. At the same time, experts as well as the public question whether such containers have already been smuggled into the country.

Withanage stressed that Sri Lanka has already become a garbage dump for rich countries and, mainly due to the lack of proper laws, the illegal importers go unnoticed.

According to environmentalists, the importation of waste was a violation of the Basel Convention, of which Sri Lanka is also a part.

Under the Basel Convention, all parties have specific obligations to transmit certain information to each other through the Convention Secretariat. This includes notifications of decisions to restrict or prohibit imports and/or exports of hazardous wastes or other wastes.

Transmitting information is essential to inform stakeholders (countries, importers, exporters, etc.) of national legislative and administrative requirements implemented in certain jurisdictions. In turn, this facilitates compliance with such requirements and may prevent illegal traffic in hazardous or other wastes.

This information on import/export restrictions and prohibitions has to be transmitted to the Secretariat either through notifications by parties using the revised standardised reporting format for transmitting information under Article 4 of the Convention, or through information reported under Question 3 (a)-(f) of the national reporting questionnaire under Article 13(3) and transmitted through designated focal points.

In a similar incident, in July 2019, Customs and the CEA found that some private parties had imported 232 containers of waste to the country without approval from the CEA, breaching the provisions of the Basel Convention. These waste consignments were imported from the UK and were lying at the Colombo International Container Terminals (CICT) and the Katunayake Free Trade Zone (FTZ) since 2017.

It is stated that the waste containers were shipped to Sri Lanka in between 2017 and 2018, violating the Basel Convention on the Transboundary Movements of Hazardous Wastes and Their Disposal.

The CEJ filed a petition seeking a court order to re-export the waste containers to the UK and to prosecute those responsible for the illegal shipment. In its petition, the CEJ highlighted possible damage to the environment and threats to the health of the general public, as the waste appeared to be discarded medical waste.

In the meantime, responding to Sri Lanka’s formal request, the UK’s Environment Agency had agreed to recall the dumped garbage.

In October 2020, the Court of Appeal ordered the CEA to return the containers to the country of origin. While the containers are currently sitting at the Colombo Port and Katunayake FTZ, the court had also directed the Attorney General to take legal action against those responsible for importing the waste containers in question.

In the meantime, the Government has sought Rs. 1.649 billion as compensation for the environmental damage caused by the waste container imports from the UK. According to the Ministry of Environment, the compensation claim has been filed with the Basel Convention Secretariat a few months ago.

However, Withanage urged the responsible authorities to take legal action against the culprits to stop similar incidents in the future and to be more vigilant.

Meanwhile, Minister of Environment Mahinda Amaraweera has instructed Secretary to the Ministry Dr. Anil Jasinghe to lodge a complaint with the Basel Convention Office regarding the 28 containers containing agro-waste imported by a Ukrainian company under the pretext of importing coriander into the country.

According to the Minister, the containers have been imported under the guise of importing coriander and the relevant authorities should pay close attention to whether the Ukrainian company has committed any fraud in this regard.

Whether these containers containing agricultural waste were deliberately imported into the country by the private sector or whether they have been deceived, however, is yet to be investigated.

Amaraweera has informed the CEA to ascertain whether the statement made by the private sector that they have been deceived is a ploy to hoodwink the local authorities.

When contacted by The Sunday Morning, Sri Lanka Customs Director General Maj. Gen. (Retd.) Vijitha Ravipriya said investigations were conducted on both incidents and in the latest incident, the samples from the containers have been sent for more investigations.

Following the investigations, necessary legal action would be taken, he said.

When asked about the reasons for the delay, Ravipriya stressed that Customs couldn’t come to a conclusion by looking at the containers, adding that to take legal action, proper facts should be presented. Therefore, Customs is investigating the incident further.

“We will take necessary legal action immediately,” he added.

Speaking to The Sunday Morning, Secretary to the Ministry of Environment Dr. Jasinghe confirmed that a complaint will be lodged immediately with the Basel Convention in this regard.

July 19, 2020 bySarah Hannan No Comments
The backlash targeted at the cabinet decision over revoking Circular 5/2001 seems to have temporarily suspended any further discussions on the matter.

September 11, 2021 byNews Admin No Comments
The national islandwide vaccination programme is in full swing, despite the nationwide lockdown that is presently in place, The Sunday Morning learnt.