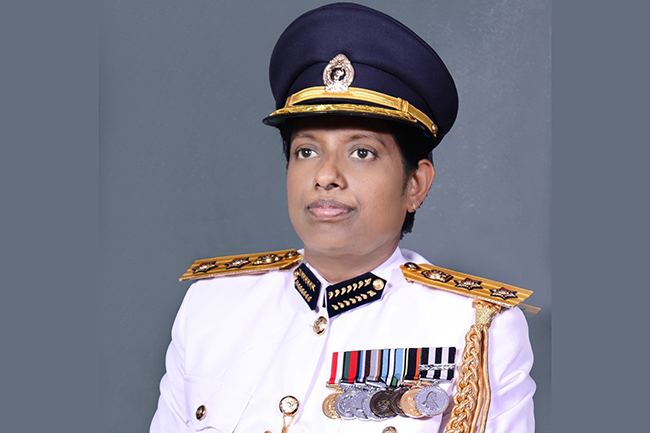 The first Woman Deputy Inspector General of Police (DIG), Bimshani Jasin Arachchi, who was removed from her duties as the DIG in charge of the Police Ombudsman Range a couple of months ago, has been appointed as the DIG in charge of Environment, Public Peace Management, and Community Police (Western Province), The Morning learnt.

According to sources, she will be working under Senior DIG – Western Province Deshabandu Tennakoon.

However, she was removed from her duties on 1 May 2021. Thereafter, on the advice of Jasin Arachchi’s legal representatives, Attorneys-at-Law Chrishmal Warnasuriya and Dushantha Kularathne, a letter was sent by Instructing Attorney Indunil Wijesinghe to Inspector General of Police (IGP) C.D. Wickramaratne, requesting that Jasin Arachchi be assigned duties suitable for her DIG position or that she be reassigned as the DIG of the Police Ombudsman Range.

Kularathne said the IGP’s actions amounted to unlawful support to a petition filed by 33 Senior Superintendents of Police (SSP) seeking an order staying the National Police Commission’s (NPC) decision to appoint Jasin Arachchi as a DIG.

“Following the filing of the Supreme Court (SC) Fundamental Rights Application No. 354/2020 challenging her appointment as a DIG, the IGP has taken further action to remove her from the said duties and has not delegated any other fit and proper duty. This is a vicarious and collateral attack on her appointment and unlawful support to the petitioners. This is also an attempt to improperly influence matters pending before the SC,” it said.

Police Legal Division Director SSP Ruwan Gunasekara and 32 other SSPs filed this petition challenging the NPC’s decision to appoint then SSP Jasin Arachchi to a DIG post. The petitioners maintain that the decision to appoint Jasin Arachchi to the post of DIG is illegal and unlawful. They allege that the appointment has disregarded the prevailing laws, thereby causing serious and irreversible damage to the petitioners’ careers in the Police Department.

The petitioners further claimed that the decision to appoint her to act in the capacity and rank of a woman DIG is a violation of the approved scheme of recruitment and promotion of the Police.

November 12, 2020 byMihi Perera No Comments
The National Operations Center for the Prevention of COVID-19 Outbreak (NOCPCO) today stated that a total of 78 workers at the Colombo and China Ports have tested positive for COVID-19.

Over 700 arrested for violating quarantine law