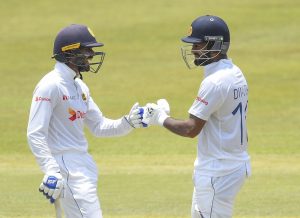 Dhananjaya de Silva (left) and Dimuth Karunarathn added 252 for the fourth wicket for hosts Sri Lanka on the fourth day of the first cricket Test against Bangladesh in Pallekele yesterday (24). Photo SLC

Captain Karunaratne led the defiance for Sri Lanka on day four as he smashed his first double hundred in Tests which was followed by reinforcement from de Silva who struck his seventh century in the format. The pair remained unbeaten as hapless Bangladesh went wicketless through the day.

The barrage of counter-offense from the hosts came from both ends. Karunaratne and de Silva gave their side the desired start to the morning as they negotiated the second new ball and scored 102 runs in the first session with Karunaratne reaching the three-figure mark for the 11th time in Tests.

Then, de Silva reached the hundred milestone with a boundary to mark his second ton against Bangladesh in this format. The hosts took charge of the second session as they scored 111 runs.

The day came to halt with clouds blocking the sun making light unsuitable to resume play. The third session commenced once the sun glistened through the dark clouds providing the spotlight for skipper Karunaratne to reach his maiden double century.

Anxious to reach this milestone, Karunaratne played a false shot that induced an edge but to his favour, the ball fell short of the wicketkeeper and travelled to the boundary rope.

The day once again came to a halt when the umpires deemed light unsatisfactory to continue play with Sri Lanka ending with 512/3 on the scoreboard trailing behind Bangladesh by just 29 runs.

Dimuth Karunaratne (Capt.) not out 234

Dhananjaya de Silva not out 154

Tigers are this much, don’t worry!