In a society that values the virtues preached by many major religions and where soldiers are viewed with special respect, the manner in which we treat our differently abled is an astonishing anomaly.

Sri Lanka continues to marginalise and restrict the country’s largest minority at a time when we need as many productive consumers and workers as possible to be active in order to jumpstart our sputtering economy. The economic consequences, although difficult to quantify, would be enormous.

In 2012, the Department of Census and Statistics reported that an estimated 8.6% of the people of Sri Lanka have some form of disability. That is one in every 12 people. But those coming under the category of “mobility-restricted” go far beyond that. Our Supreme Court defined them as the country’s largest minority, a group of several million people whose movement is physically impaired. These include the elderly, pregnant persons, and those who are commonly referred to as differently abled from accidents, birth, and war.

It is perhaps time that both the Government and the public took a closer look at this ridiculous situation and fully comprehended what it is costing us economically when we deny these millions their right to integrate into society. More urgently, we should take the few simple and ridiculously low-cost initiatives to bring these millions into mainstream society and economy.

It’s just bad for business, isn’t it? You own a supermarket or hospital or restaurant or hotel or school or even just a grocery shop, but a very large percentage of the population can’t patronise you because you haven’t thought of investing a few thousand rupees for a cement wheelchair ramp and a differently abled toilet – things that a village mason could fix up for you in a couple of days. So you lose the certain business and revenue of a huge chunk of your prospective customers. Remember that any family that has a mobility-restricted person, whether it’s an elderly person in a wheelchair or someone born differently abled, will choose not to patronise you because of this restriction on a member of the family.

The situation in government as well as provincial and local government facilities is worse than in the private sector. With so little in terms of online services being available, Sri Lankans are still queuing up outside these offices, from police stations to labour offices. How could a differently abled person access these?

What’s even worse is that public transport facilities for mobility-restricted people are almost non-existent. How many buses (both private and state) and trains have these facilities? What about cab companies and three-wheelers?

There don’t seem to be quantifiable estimates of how much the non-integration of mobility-impaired persons is costing the economy. But it must surely run into hundreds of billions of rupees, plus a sizable amount that would go to government tax revenue.

The Department of Census and Statistics’ population census in 2011 showed 8.7% of the total population classified as “People with Disabilities” (Table 1). This does not count the elderly and pregnant persons, as the Supreme Court defined. So the actual number is far higher. 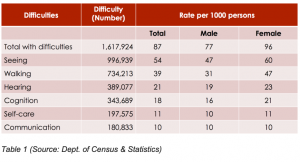 A very high proportion of foreign tourists to Sri Lanka are retired persons, some of whom have mobility restrictions due to their age. Yet, apart from accessibility in a few hotels, especially the more modern ones, much more can be done to make the country and its attractions more accessible to the differently abled.

The Supreme Court has directly ordered no less than six ministries and three government authorities to take immediate measures to enforce the legal requirements for accessibility in the design and construction of all parts of new buildings and services in public spaces. Some of these bodies have sent out circulars, but these are hardly ever enforced.

Rarely does the same issue become the subject of multiple Supreme Court judgements, but this has been the result of the majority of our country completely ignoring the judgements. The first case was in May 2009 (SC FR Application No. 221/2009) and was also noted as being a public interest litigation, in addition to being a fundamental rights application. The Supreme made two immediate orders in 2009 – an Initial Order and Clarifying Order – and a Final Order in April 2011, all of which ordered that the state enforce the Rights of Persons with Disabilities Act No. 28 of 1996 and the Disabled Persons (Accessibility Regulations) Regulations No. 1 of 2006.

As a result, the Ministry of Social Services issued Circular No. MSS/7/8/ACC to all secretaries to the ministries, all chief secretaries of the provincial councils, and all district secretaries. The Circular stated that all public buildings and public places must provide facilities to persons with disabilities, which should be constructed in a manner that complies with the aforesaid regulations, and that newly constructed public buildings should not be issued a certificate of conformity (COC) unless they are constructed in compliance with the aforesaid regulations.

The near-complete ignoring of these orders and circulars led to the same person filing a second fundamental rights application in 2018 (SC FR Application No. 273/2018). In an exhaustive 28-page judgement in April 2019, the Supreme Court noted: “The stark truth is: Meaningful implementation of these accessibility laws by the State and the private sector is a continual failure and thereby, beyond doubt, even at numerous newly built environments, there is destructive marginalisation…It has caused continual violation…and thereby denial of opportunity of equality for safe access and their use in daily life by the country’s largest minority.”

The Supreme Court also ordered relevant authorities to prosecute offenders (both state and private) in the High Courts and Magistrate’s Courts.

Sri Lanka in 2007 signed the United Nations Convention on the Rights of Persons with Disabilities (UNCRPD) and it was ratified in 2016, meaning our country’s international legal obligation came into force from 9 March 2016. The UNCRPD has wide global acceptance, with 163 states having signed it. However, Sri Lanka is yet to accede to the Optional Protocol, signed by 94 states, which provides any individual or group of individuals to communicate with the Committee on Rights of Persons with Disabilities (CRPD) when redress is denied for violation of their rights.

Recommendation: Immediate action should be taken by the Government for accession to the Optional Protocol.

Even before signing the UNCRPD and the multiple Supreme Court judgements, the Sri Lankan Parliament, as far back as 1996, passed the Protection of the Rights of Persons with Disabilities Act No. 28 of 1996 which specifically provides for “equality in recruitment for employment and admission to educational institutes and for physical accessibility to public places”. However, it does not have provisions to safeguard rights of persons with disabilities, and a new draft Disability Rights Bill (DRB 2006) was prepared and approved by the Cabinet in 2008. However, there have been long delays due to it not being sufficiently comprehensive in terms of the UNCRPD and this has not yet been passed into law.

Recommendation: The DRB should be prepared in compliance with UNCRPD. The Bill should have provisions to separate functions of the state implementation co-ordination mechanisms and independent implementation monitoring mechanism as per Article 33. Speedy arrangement should be made by the Government of Sri Lanka to enact the DRB in Parliament without any further delay (UN Universal Periodic Review – Sri Lanka 2017 Third Cycle, 28th Session 2017).

The right to employment is a global human right. But restricting access to workplaces and not having affirmative action employment programmes effectively puts a full stop to any of this. Interestingly, many employers have found that differently abled persons work as well as other employees – if not better – when employed in suitable posts.

The world has gone far forward in this regard to the point where it is not even an issue in any Asian and western countries, putting Sri Lanka to shame. An example can be seen in Figure 1. 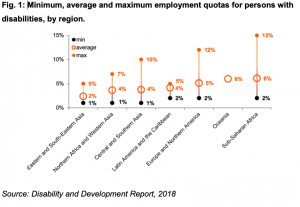 Public spaces and services that must cater to the differently abled

Figure 2 shows the main services that must be designed for inclusivity of access. 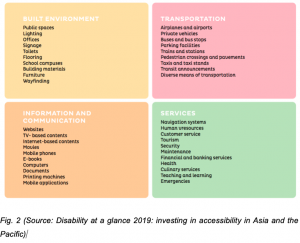 The writers recommend that the following steps, which are globally accepted initiatives, be immediately implemented. There are many more actions, but we have focused on the obvious ones.

•Authorities urgently take legal action against those who do not abide by accessibility regulations in the public and private sector.

• Curbs should simply be sloped to allow wheelchairs to cross. This is a zero-cost action in the hands of local authorities. Streets without pavements should be made safe for wheelchair users.

• Overhead pedestrian crossings should include wheelchair ramps which could be used by everyone, rather than steps.

• Buses and trains – relevant ministries should be firmly told to follow the law and import only busses and railway carriages that provide access to the differently abled. Provincial transport authorities should not provide licenses to private busses that don’t comply.

• Cab companies must be required to have a sufficient number of vehicles that are differently abled friendly.

• Wheelchair ramps which can be used with minimal fatigue with open entrances.

• Corridors must be wide enough to accommodate wheelchair users.

• Elevators (lifts) should be provided for any building with more than two stories. Lifts must be large enough to accommodate wheelchairs.

• Toilet facilities for differently abled persons must be provided on each floor.

• Guide rails for the convenience of non-wheelchair-bound differently abled persons such as pregnant or elderly persons.

•Proper international standard signage for differently abled facilities that can be understood by those without literary skills.

• Every major vehicle manufacturer has vehicles designed for differently abled persons to drive. There’s no reason why they can’t be made available in Sri Lanka, apart from the motorised wheelchairs that we see on the roads. These should be provided at duty-free prices.

• Parking – all public parking should have reserved spots for the differently abled.

Detailed specifications on most of these matters can be found in circulars already issued by various government authorities.

In this brief article, we do not have the space to touch upon the hearing-impaired and visually impaired who also require somewhat different facilities for accessibility. However, it does not take a major investment to extend accessibility programmes to these segments.

Sri Lanka has had more than enough legal literature and guidelines on this simple subject. It is now time, in fact far past time, for action. Keeping millions of Sri Lankans “out of sight, out of mind” is demeaning our society and harming our devastated economy.

Dr. Nicholas Ruwan Dias is a Managing Partner of Cogitaro.com and a Digital Architect at Aegon Asia based in Kuala Lumpur. He holds a BSc in Computing from the University of Greenwich, a Master’s in Computer Software Engineering from Staffordshire University, and a PhD from the University of Malaya. He is completing a second doctorate (DBA) from Universiti Utara Malaysia. He can be reached vis ruwan@cogitaro.com

India and EU to build joint infrastructure projects in Asia

May 10, 2021 byNews Admin No Comments
The European Union (EU) and India agreed to resume stalled free trade negotiations and seek closer co-operation to combat climate change at a virtual summit on Saturday (8), as concerns about China br