October 27, 2021 by Dimithri Wijesinghe No Comments

“The Road Less Travelled: Little known sites of Sri Lanka” is an upcoming webinar to be held this Friday (29) at 4 p.m., hosted by Sri Lanka Tourism on their Facebook page and YouTube channel. 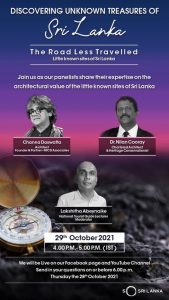 The event is set to feature a panel of experts as they share their knowledge on lesser known sites of Sri Lanka. The expert panellists include architect and MICD Associates Founder/Partner Channa Daswatte, and heritage conservationist and chartered architect Nilan Cooray, who will discuss the architectural value of the lesser known sites in Sri Lankan, which can be experienced by both local and international travellers.

We reached out to Daswatte, a well-known architect of our time, celebrated for his work both in Sri Lanka and abroad. Daswatte shared that during the discussion, Prof. Cooray will talk about the pre-colonial architectural structures that may not be part of the great tourist route. “The typical cultural triangle route that we are all well aware of; these structures will be scattered beyond these familiar routes,” he said.

He shared that these sites are primarily those that took form prior to the 16th Century, with the Portuguese taking point in the island and also having an independent kingdom have its reign simultaneously. “There was a lot of culture happening and a lot can be seen through the structures of its time,” he said.

Daswatte shared that he himself will be touching on more of the modern period structures – buildings that are from that modern era that are visitable, however few they may be. He stated that he will attempt to discuss the works of the great Jeffery Bawa, including the Polontalawa Estate Bungalow in the northwest of Chilaw and the Trinity College Chapel.

He shared that he will attempt to talk around these iconic structures and those in its vicinity that may have been inspired by these works as well as “those structures that were inspired around it”.

He also shared that these conversations are important because unfortunately, the protection afforded to structures of the modern era is lacklustre at best. “If a building is pre-1915, if it is over a 100 years old, the owners must declare it so and claim it as such. If not, then it is free for all and that is unfortunate,” he said.

Daswatte also added that what is happening now with a lot of our colonial structures is them getting torn down or not receiving due recognition. He said that we mustn’t forget that even though they are products of our unfortunate past and bear the influences of colonialism, that does not mean that it is not still ours. To write them off as “other” is a shame, said Daswatte, making a passionate plea that all structures, be they a product of a distasteful past, still bear character and tell our history. It is ours and we must embrace it and learn from the stories it has to tell.

He shared that modernism isn’t as commonly appreciated and it is unfortunate – when you take structures like Kandalama Hotel, the Minnette de Silva Kandyan Art centre, and many others, all deserving of recognition. “It is all inspired by Sri Lanka’s architectural legacy, and perhaps we can all take note and appreciate what has been created, and tourists too will then have the opportunity to explore these attractions and experience a wider more diverse snapshot of Sri Lanka,” he said.

April 30, 2019 bythemorninglk No Comments
With a deep-rooted connection to the art which hails from his father Roshan De Silva – renowned Sri Lankan musician – Mike De Silva is no novice to the local music scene.

August 23, 2021 byNews Admin No Comments
Subfertility is estimated to affect as many as 186 million people worldwide. Even though women are accused of being childless, male subfertility contributes to more than half of the cases globally. Am