Discussions on reopening airport Govt. yet to decide: Tourism Minister 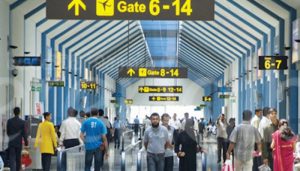 The Government is yet to take a decision on reopening the country’s international airports after the airports were closed as a result of the Covid-19 pandemic, according to Tourism Minister Prasanna Ranatunga.

He told The Morning that while discussions were ongoing at present, the Government had not taken any decision so far.

However, it was further delayed until all Sri Lankans were repatriated.

According to Airport and Aviation Services (Sri Lanka) (AASL) Ltd. Chairman Maj. Gen. (Retd.) G.A. Chandrasiri, over 40,000 Sri Lankans are waiting to return to Sri Lanka and as of now, around 12,000 have been repatriated.

According to him, the two airports will be open for operations once the repatriation programme conducted by the Presidential Secretariat is completed.

March 18, 2020 byTSM Web Desk No Comments
The Navy has set up a quarantine centre at the at the Boossa naval premises.