The Proteas after their 3-0 triumph in Colombo last night

Respond to The Morning Sport after yesterday’s match, regarding his lack of runs with the bat, Sri Lanka Captain Dasun Shanaka said, “We had batting pitches at Pellakale. The ball was coming on to the bat and we could freely score runs. But the pitches we prepared at the Premadasa were spinning tracks. For me personally, the ball wasn’t coming on to the bat. I was hitting the ball well during the T20 league but these pitches were different.”

He also added that there won’t be any changes in the World Cup squad regardless of the series whitewash last night.

He also emphasised the fact that he believes in the his team and that he will continue to back them to do well in next month’s T20 World Cup in UAE and Oman. 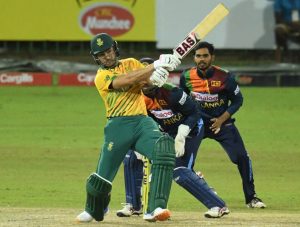 Visiting South Africa secured a series whitewash with a 10-wicket victory over an ill-fated Sri Lanka in the third and final Twenty 20 International (T20I) here at the R. Premadasa Stadium in Colombo yesterday (14).

For the second time in a row, Dasun Shanaka won the toss and elected to bat first but the hosts struggled at the top and continued in another disappointing batting performance, which saw them struggling towards a paltry total of 120 in 20 overs.

The Proteas backed up their superlative bowling performance with a dominant batting display to reach the target within 14.4 overs without a drop of sweat.

Once again, the Proteas’ openers were too good against Sri Lankan bowling. Their bowling wasn’t up to the mark, and didn’t they really pounce on it?

Quinton de Kock put up scores of 36, 58 not out, and 59 not out in the three T20I matches to end up with most runs and the Player of the Series award. In the bowling department, Bjorn Fortuin’s two wickets yesterday put him on top of the wicket-takers’ list in the series, with a total of five scalps.

De Kock carried on from where he left in the last game and got the Proteas off to a flier in the Powerplay overs. Sri Lanka opted to go with spin from the very first over, but unlike the South African spinners, they couldn’t contain the run flow. It was a flawless partnership between De Kock and Reeza Hendricks. Sri Lanka spinners failed to create any pressure as they continued to offer loose deliveries almost every over. They reached the target with 32 balls remaining.

It was a disappointing start in the Lankan Powerplay. Avishka Fernando struck two boundaries but gave a return catch to Gagiso Rabada. Dhananjaya De Silva was sent at No. 3, only to stay in the middle for three balls. Rabada sent Bhanuka Rajapaksa’s leg stump cart-wheeling soon after. The only successful batsman at the top was Kusal Perera, who, with breathing difficulty following a bout of Covid-19, top-scored with a valuable 39. A series of soft dismissals saw Sri Lanka fall to 86/7 in the 15th over. A little cameo, that included two huge sixes, by Chamika Karunaratne carried Sri Lanka to 120.

It seemed that Sri Lanka’s batting got worse by every match in the series. The first three wickets that they lost in the Powerplay took away all their chances of posting a challenging total, that too after winning the toss twice. What followed during the middle overs was even more disappointing. Credit goes to South Africa for bowling on a tight line and length. But the way in which our batters got out was beyond any logical comprehension.

The streak of 49 dot balls in a T20I game is a cardinal sin. That is more than seven overs and you simply cannot win a T20I if you commit such a blunder when batting. The whole Sri Lankan innings only had eight fours and two sixes, whereas the Proteas scored six fours and a six inside their Powerplay overs.

With another series lost, Sri Lanka have now been beaten in five bilateral T20I series out of the last six they played. This is also their second consecutive 3-0 whitewash at the hands of the Proteas and their fourth 3-0 whitewash, since their 3-0 win in Pakistan in 2019.

Where does Dhananjaya De Silva fit in the Sri Lankan batting line-up? What should be his role? Let’s keep aside Skipper Shanaka and look at his second in command! Sri Lanka badly needs to analyse what sort of role De Silva should play in T20s. Ideally, he should play the sheet anchor role and try to accumulate runs in the middle overs. His bowling could be vital for the side, but he is playing as a batsman. Sri Lanka need him to bat well in whatever position he is batting.

We’ve spoken about their struggle against the spin, and Shanaka’s lack of runs. There is no point in touching those things again. But with only four warm-up practice matches remaining before their next month’s T20 World Cup campaign, Sri Lanka desperately need an overhaul. There is no point in lamenting over the past results or performances. We need to find the way to win with the team that we have. For that, players should be given specific roles and hope that they execute those roles at the top. However, it is easier said than done.

Chamika Karunaratne not out 24

Dushmantha Chameera not out 2

Did not bat: Maheesh Theekshana

Quinton de Kock not out 59

Reeza Hendricks not out 56

Dilemma between SLRFU and Armed Forces over two rugby competitions

September 27, 2021 byRevatha No Comments
As Asia Sevens Rugby to kick off in November

Shammi back at SLC helm!